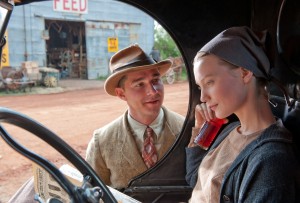 Bootlegger family saga “Lawless” is the punchy followup to “The Proposition” from director John Hillcoat and screenwriter-composer Nick Cave, and it’s a rowdy, fully-appointed world.

Based on the novel, “The Wettest County in the World,” it fictionalizes the real-life Bondurants, a successful and self-regarding family of Franklin County, Virginia bootleggers.

Brute brooding and abrupt violence are on offer, as is Cave’s fondness for post-Biblical wafts of meaty verbiage. “Blood and violence. My brothers had a talent for it. A gift. They were susceptible to its needs,” narrates the youngest of the bunch, Jack, played at first as earnest puppy-dog by Shia LaBeouf, but later as a cuss as prideful as any of his outlaw brothers, who include Tom Hardy, convinced he’s closer to immortal than just damn lucky. The early politesse of “always happy to oblige an officer of the law” will, by nature, give way by the end to “You candy-ass motherfuckers! Every one of you!” (“Strong, bloody violence” is the apt badge of courage pinned on the picture by the MPAA as one of the reasons for its “R” rating.)

Bigger gangsters and the law want to wet their beak, as they must in a story like this, including boss Gary Oldman, splendid in a dandy’s finery, a pinstripe garlanded with a necktie the size of a table napkin and handy with a quick, offhand gravesite. Oldman’s lingo swilling is topped by lawman Charlie Rakes (Guy Pearce), a perfected Percy Dovetonsils, a prissy escalation of Cave’s own fine history of sartorial peccadilloes. (Or, in one memorable showdown, a brassy tincture of the late Klaus Nomi.)

While not crouching to the level of his role as gravel-garbler Bane in “The Dark Knight Rises,” Hardy’s speaking voice is sometimes harder to hear than the sound of him creasing his cheeks. He’s a proud, grumbly bear: even an attempted garroting leaves him heaving his bulk instead of exploding outright. Still, he does get some audible lines: “We control the fear, you understand? Without the fear, we are all good as dead.” (“What the fuck, we’re all good as dead” is the more resigned than self-aware retort.)

The Bondurants are unusual epicures as moonshiners go, always refining their distillation processes for purity and strength. (Shit’s strong.) As their ambition grows, and outsiders grow more greedy, the stills are relocated farther and farther into the forest. Hillcoat describes a world more coarse and provisional than the familiar movie imagery of rural America in the 1930s. The Bondurant cover business, an out-of-the-way café, near water, near weeping willows, looks as if it were slapped up the hour before, porch posts hewn from just-barked logs, shabbily annealed cheap window glass, all rude boards inside, as simple as an animals’ shed. Spots of specificity amid plain surroundings are the rule in city scenes, too, suiting both the punch of the compositions and the survival-level neediness of that time.

As the warring factions escalate their battles, nurse their grudges, lick their wounds, Jack gains confidence, has cash to burn, and nurtures his crush on Bertha (Mia Wasikowska), a pious young woman with a forbidding father and her own rebellious streak. Her whole-hearted radiance beside LaBeouf’s effortless childishness is another sort of story altogether. One scene, a lord-have-mercy conniption, rises to a level that would have set an entire film ablaze, in which young Jack scopes out Bertha. Down a hillside, voices rise hearty from the plain white church up on cement blocks. Inside, a trade of ceremonial foot washing is taking place. Jack enters and watches with virginal terror, with sweat bursting from his cheeks as he watches Bertha’s pale foot (in close-close up) being washed by another churchgoer. While not a member of the flock, Jack sits, flustered, fevered, overcome, and under her father’s disapproving eye, Bertha crosses the room to wash Jack’s: voices rise in consternation and disapproval as the basin flies and Jack escapes. Later, once the flirtation grows, endangering the Bondurant enterprise, she teases him, “You’re an outlaw, Jack.” He gollies, “Just a matter of perspective.” (The true man’s the one who left a boot behind running from another’s church.)

“Lawless” could also use more of the spirit and spunk of the bluegrass-style version of “White Light/White Heat,” with Lou Reed’s lyrics sung by Ralph Stanley: there’s less of a waxworks feel in the old man’s voice than in the movie. Like the version that comes in the middle of the movie, it’s anachronistic as hell but fantastically lovely. The script is clever to stay away from baleful allusions to the contemporary drug war: the story confines itself largely to the resentments of the brothers and the lawmen, and the mythopoeic setpieces that occupy Cave’s idiosyncratic fever dreams. (Then again, Prohibition by any other name is the same bleak, bloody tale.) Characters posture and preen, buck up and snap back, but Cave’s really all about the psychotic break, rueful abruptness, the fast, unforgivable character of fist-to-fist brass-knuckle bludgeon or the errant shotgun blast. Jessica Chastain whispers and sashays through the story as a showgirl gone south, much flesh, little backstory: bless her pale hands, near translucent with decorative crimson talons.

“Lawless” opens Wednesday. The splendid red-band trailer is a moody little movie on its own.