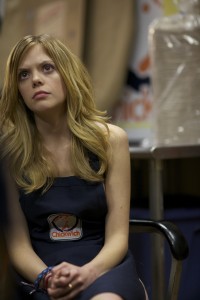 Audiences got into heated discussions at some early screenings of “Compliance,” including combative Q&As at Sundance 2012, and there were walkouts reported opening weekend in Los Angeles and New York. It’s a provocative pressure-cooker of a movie that finds an effective, thriller-style narrative to dramatize perennially pertinent subjects about societal control, peer pressure and caving in to authoritarian behavior. At a Chick-fil-A-like fast-food restaurant (“ChickWich”), a man (Pat Healy) calls, claiming to be a cop, accusing cashier Becky (Dreama Walker) of stealing money from a customer. The middle-aged manager, Sandra  (Ann Dowd) is told to help the officer, and to interrogate Becky in increasingly invasive ways. It gets worse. Then it gets worse. Then… The taut, economical script is not a tract: it’s a horror movie that unfolds through a single work shift, and you can understand why it would drive some viewers out into the aisles. Writer-director Craig Zobel says that newspaper reports of similar, seemingly unlikely pranks, as well as studies like the Milgram psychology experiments, inspired him to write the film after several larger projects went astray. Talking to him recently, Zobel said that the subject scared him enough that he had to pursue the film, and he wanted to make it as concentrated a story and production as he could. “Compliance” is a potent, terrifying portrait of corporate authority as much as of potentially awful human behavior. Are the characters, or the setting, most frightening? The potential for ready obeisance in all sorts of modern-day circumstances leave a metallic tang in the mouth: even without seeing the uniform of the inquisitor, the characters believe. Zobel, who’s from the Atlanta area, rejects the assertion some have made that he condescends to the working class, noting that much of that criticism comes from the North, from reviewers who are far removed from the working class. The characters aren’t stupid: they’re worn weary, and we live in their world as well. 90m. (Ray Pride)

“Compliance” opens Friday at Landmark Century. A trailer is below.