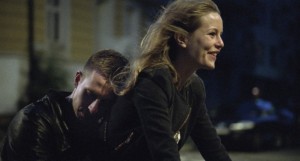 A single sigh or a series of satisfied sighs is hardly the stuff of a true movie review, but here goes:  Ahhhhhh. Joachim Trier‘s 2006 debut, “Reprise,” was one of the past decade’s most memorable first features, and his second, “Oslo, August 31” is a ringing astonishment, lyrical, precise and haunted. Anders (Anders Danielsen Lie, from “Reprise”) is a thirty-four-year-old at the end of rehab out in the country, and for one day, for a job interview, he’s allowed into the city, into Oslo, place of memories and regrets. Anders is weighted by all the things he’s done wrong so far in his life. What can happen in a single day, the breath and heart across a day in the life of a damaged man who knows not what he wants but what he wants to conclude: the end of hurt, the end of heart to others. What paths can be crossed, what lines will be crossed? I’ve seen “Oslo, August 31” several times in the past year and each time, it practically trembles with life, especially in Lie’s lead performance, rich with splendid, galvanic moment-to-moment awareness. I’m looking forward to seeing it on the big screen this weekend, where it opens at Siskel—by coincidence!—on August 31. It’s one of the year’s finest films: breath, heartbeat, despair, hope, all in a single day in this troubled young addict’s life. Such beauty. Subjective, serene, sublime: I like it a lot. Trier, a one-time Norwegian skateboard champion, is also one of the best directors working in Europe today. I’m sniffly just trying to write about it. 96m. (Ray Pride)

[…] Trier is one of our most literary filmmakers, in the sense that in movies like “Reprise” and “Oslo, August 31st” he fuses the lyricism of cinema with the flow and structure of the […]