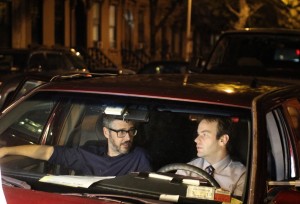 Drawn from his own one-man show, Mike Birbiglia’s lovely, melancholy “Sleepwalk with Me” is an affable and offhandedly funny portrait of the life of a hesitant, dithering modern start-up stand-up’s life, mixed with love (and sleepwalking) in a fashion gently reminiscent of 1970s Woody Allen. The thirty-four-year-old Birbiglia has an understated charm as leading man—even with the goofy name “Matt Pandamiglio”—and as co-writer (with Ira Glass) and director, his comedy timing is fine. “Endearing” isn’t a word I’ve thought about a movie in a while, but that’s one word that suits the comedy of “Sleepwalk.” Thinking back on how he met his wife, he tells us ” I kept running into her on campus… because… I was following her.” And the miraculous James Rebhorn, playing his father-in-law, finds the perfect lilt when he calls out to his wife, Carol Kane, “This bacon is delicious honey, it’s really greasy.” (Carol Kane is less a callback to “Annie Hall” than a callback to Carol Kane: unstemmably daffy and ineffably present.) “Sleepwalk”‘s greatest coup may be its portrayal of the making of the standup sausage: its authenticity has been earned through experience. It’s hard to transform live performance into the stuff of movies. New York magazine television critic Matt Zoller Seitz deciphered the style of Louis CK’s series as stand-up by other means: each dramatic scene has the free-associative, intensely personal character of a stand-up riff. “Sleepwalk with Me” is simpler than that, but virtuous—and funny—nonetheless. He’s funny about why people want to be funny in public, at the risk of moment-to-moment mortification. Marc Maron’s blunt comedy-club owner is also a sweet moment of unsentimental portraiture. With Lauren Ambrose, David Wain, Kristen Schaal, Wyatt Cenac, Jessi Klein, Henry Phillips. 89m. (Ray Pride)

“Sleepwalk with Me” opens Friday at the Music Box. Ira Glass will appear to discuss the film at all Friday and Saturday screenings. A trailer is below.