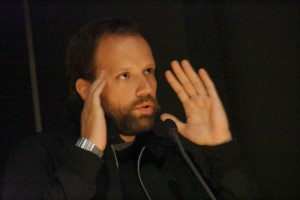 (Alpeis) Something is rotten in the state of Greece. A country of just over eleven million, currently in its latest phase of being wrung dry by the European Union, the World Bank and the International Monetary Fund (or, “the troika”) after the ruinous 2004 Olympics, among other setbacks, Greece’s cultural output has largely come to a standstill, and the future of its film industry is in question. Some of the more interesting filmmakers work in other countries, often in commercials, to make the micro-budgeted features still being made, like the delirious, weird and seductive examples of Yorgos Lanthimos’ “Dogtooth,” “Dogtooth” co-producer Athina Rachel Tsangari’s “Attenberg” and Babis Makridis’ “L,” co-written by “Dogtooth” screenwriter Efthymis Filippou. While these filmmakers have worked together, and there’s a similar deadpan to all these films, including a suspicion of language and its received or accepted meanings, crisp, often clinical framing, dance bits that are theatrically stylized, as well as Brecht-like devices that include startling bursts of absurd violence, the filmmakers have all been quick to point out there is no “Greek new wave.” They’re making do with what they can. “Alps,” Lanthimos’ follow-up to “Dogtooth” (also co-written by Filippou) is equally cryptic and mannered, remaining physical while yearning to the abstract. While its particulars are decipherable with some effort, most synopses are more confounding than illuminating. It’s genuinely discomfiting, then irritating. The strands of the story, the compulsions of the characters, seem to elude coherence, however poetic, however strange many of its sequences, until the final scene, then… POW. There ya go. It’s a terrifying embrace of patriarchal punishment, told to a pop song, utterly cold, sudden, close to perfect, cut black with a slight judder-of-a-shudder to the frame itself. Irony be gone. With Ariane Labed, Aggeliki Papoulia, Aris Servetalis, Johnny Vekris, Stavros Psillakis, Efthymis Filippou, Eftihia Stefanidou. 93m. Reviewed in 35mm. Widescreen. (Ray Pride)

“Alps” opens Friday at Siskel. A teaser and a trailer are below the longer one, MNSFW. Both indicate the gorgeous chill of the filmmaking.