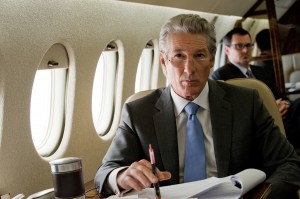 Sleek, silver, turning sixty, Robert Miller seems to be atop his world, a billionaire commanding the love of family and preparing to sell the family financial empire for a rare price in a post-economic-crash world. But the Clintonesque Miller (Richard Gere) has not gambled long-to-short and short-to-long only on a series of deals, but on multiple sets of books, false statements and the affections of a much younger mistress (Laetitia Casta) whose art gallery he supports. Gere’s multiple reactions, physical, flickering across his face, demonstrating the conflicted businessman’s reactions to these multiple fiscal and mortal obstacles in a given week is post-Pakula thriller goodness. The city has a sinister silver sheen as well, by night and by day, and a pivotal scene in what should be the sylvan outskirts holds its own danger. Cinematographer Yorick Le Saux, who shot the candy-box colors of the Tilda Swinton-starring melodrama “I Am Love” and co-photographed Olivier Assayas’ brisk, bristling terrorism epic “Carlos” is key to capturing the urban settings of many locations, both regal and commonplace. Writer-director Nicholas Jarecki’s script takes the story into unexpected dramatic conflicts, and even several potentially melodramatic ones are knit and spoken with terse efficiency and some verbal wit (especially a confrontation between Tim Roth’s investigating officer and a rightly pissed judge). The world of “Arbitrage” spins like a particularly toothsome Vanity Fair article, with the right amount of veracity dashed with darkness. With Susan Sarandon as the quietly watchful wife, and Brit Marling as his daughter, potential heiress apparent, and a key financial officer at the corporation. Graydon Carter’s cameo as the potential buyer of the flawed company ends with a “Bob the Gambler”-worthy acknowledgment that gambling and money and bookkeeping may only be a matter of appearances being bought and sold, and hardly substance. Also with Larry Pine, Stuart Margolin, Bruce Altman, Chris Eigeman. 100m. (Ray Pride)