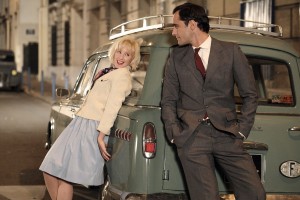 Catherine Deneuve and her daughter Chiara Mastroianni play a mother and daughter with curiously skewed love lives in “Beloved” (Les bien-aimés), written and directed by Christophe Honoré (“Dans Paris”). Sappy numbers by Alex Beaupain make for a smug musical lacking either retro panache or genre-savoir. Set in Paris, Prague, Reims, London and Montreal, “Beloved” makes a thoughtless parallel between Soviets rolling into Prague and Saudis flying into the Twin Towers. Titles for 1964, 1978, 1997, 1998, 2001 and 2007 mark the time for young clerk Madeleine (Ludivine Sagnier) to steal Roger Vivier heels from her workplace, turn tricks, hook up with a Czech endocrinologist and raise her daughter Vera (Mastroianni, at about age forty) who falls for a gay drummer in London who says his day job is a vet. A plot of impulsive affairs and decades-long infidelity yields  a slight, saucy comedy of bourgeois libidos. More interesting is what Honore laments in his press notes: “For a long time I believed that only my parents had known true love, while I could only love halfway, crippled by mistrust and terror. But in the end, I decided my love stories were surely as valid as theirs. The impossibility of loving carelessly in no way diminished our attachment or passion.” That rather strange reasoning, to acknowledge a generation living and loving with AIDS, sheds a light that never finds its way to the emulsion of “Beloved.” With Milos Forman, Rasha Bukvic, Paul Schneider, Louis Garrel, Ben Sellem. 139m. (Bill Stamets)
“Beloved” opens Friday at the Music Box.
Ray Pride