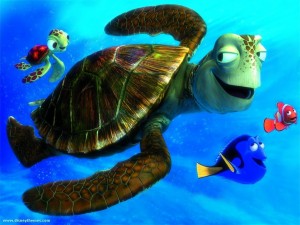 “Finding Nemo,” in memory, feels like one of the more genial of Pixar’s movies, but I was surprised to discover Newcity’s original May 25, 2003 review, was so direct and to the point: “Pixar: bottom-line behemoths who do no wrong fiscally or funnily. The top-of-the-line, terabyte-heavy animation of the comic creatures under “Finding Nemo”’s sea is a joy unto itself: an ever-undulating Lava Lamp tapestry suitable for both moppets and potheads. The voices include Albert Brooks and Ellen DeGeneres, and both are swell, writers and directors alike adept at exploring and exploiting the contours of their comic personalities, as much for range as for possible familiarity to an audience. The jokes are terrific, families are reunited, the gags continue through the end credits, and Apple stock will remain buoyant.” Apple stock does indeed remain buoyant, as does Disney’s, since their acquisition of Pixar a few years ago and the decision to convert several older titles, like “Nemo,” to 3D. Director Andrew Stanton, coming off this summer’s semi-live action “John Carter,” has returned to production at Pixar with… “Finding Nemo 2.” 100m. (Ray Pride)