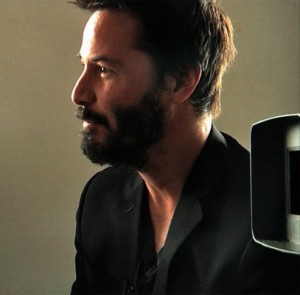 Keanu Reeves, about to make his directorial debut with a China-set action movie, makes an engaging interlocutor in “Side By Side,” Chris Kenneally’s clear, brisk conversation of a documentary about the repercussions of the abrupt accomplishment of the handover from 35mm film as what we’ve known as “movies” for over a century to multiple permutations of digital production, distribution and exhibition. (Distributor Tribeca Film also has at least thirty short outtakes from the on-screen interviews at their YouTube channel; one with Lars von Trier in his office is below. It’s a genial mix, and a list of names alone suggests the quality of the exchanges: Steven Soderbergh, James Cameron, David Lynch, Martin Scorsese, Lana Wachowski, Andy Wachowski,  Richard Linklater, Christopher Nolan, Wally Pfister, David Fincher, Greta Gerwig, Robert Rodriguez, cinematographers Vilmos Zsigmond, Michael Chapman, Vittorio Storaro, Michael Ballhaus and Anthony Dod Mantle, editorial eminence Walter Murch, Danny Boyle, Dick Pope and “Lawrence of Arabia” editor Anne V. Coates, and, wouldn’t you know, George Lucas. Postures, postulations and occasional apercus follow. I’ve been a fairly diligent student of developments in the field, and can recommend for further reading a far more comprehensive and general-reader-friendly text from David Bordwell, “Pandora’s Digital Box: Films, Files, and the Future of Movies,” a PDF ebook available at davidbordwell.net/books/pandora.php. The Monday screening will feature a panel discussion, partially directed toward the Film Center’s necessity to outfit its second theater for the DCP D-Cinema format that studios are applying to both their new releases and their archives. 98m. (Ray Pride)

“Side By Side” plays at Siskel Saturday, Monday and Thursday.