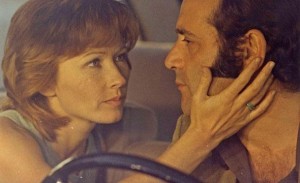 (Nous ne vieillirons pas ensemble) There’s bruising to be had in the films of Maurice Pialat: in movies like “Police” and “Loulou,” the lack of dramatic compromise is as dogged as his characters’ emotional stubbornness. His new-to-America “We Won’t Grow Old Together,” released in 1972, the same year as Bertolucci’s “Last Tango In Paris,” is a strikingly good addition to his films known here, such as the Criterion-appointed “A nos amours.” Even more autobiographical in intent than his other work, “We Won’t Grow Old Together” looks intently at the back-and-forth romantic tumult that results from a six-year-affair between a film director of brute ego and a younger, less-educated woman. Pialat based the story, less meet-cute than end-bruit, on his own novel, but the story strikes hard at what one would imagine to be his own life, as the woman tells him that he must work harder, must commit himself to making his art something more than a mere sum of fury. Angry, repetitive, compelling, hurtful, heartfelt, it’s both humane and inhuman, which makes it a fantastic thing to observe from afar (both in terms of the characters and the four decades since it was forged). With Jean Yanne and Marlène Jobert; Yanne won acting honors at that year’s Cannes Film Festival. 110m. (Ray Pride)

“We Won’t Grow Old Together” plays Siskel Friday-Sunday and Tuesday-Wednesday.