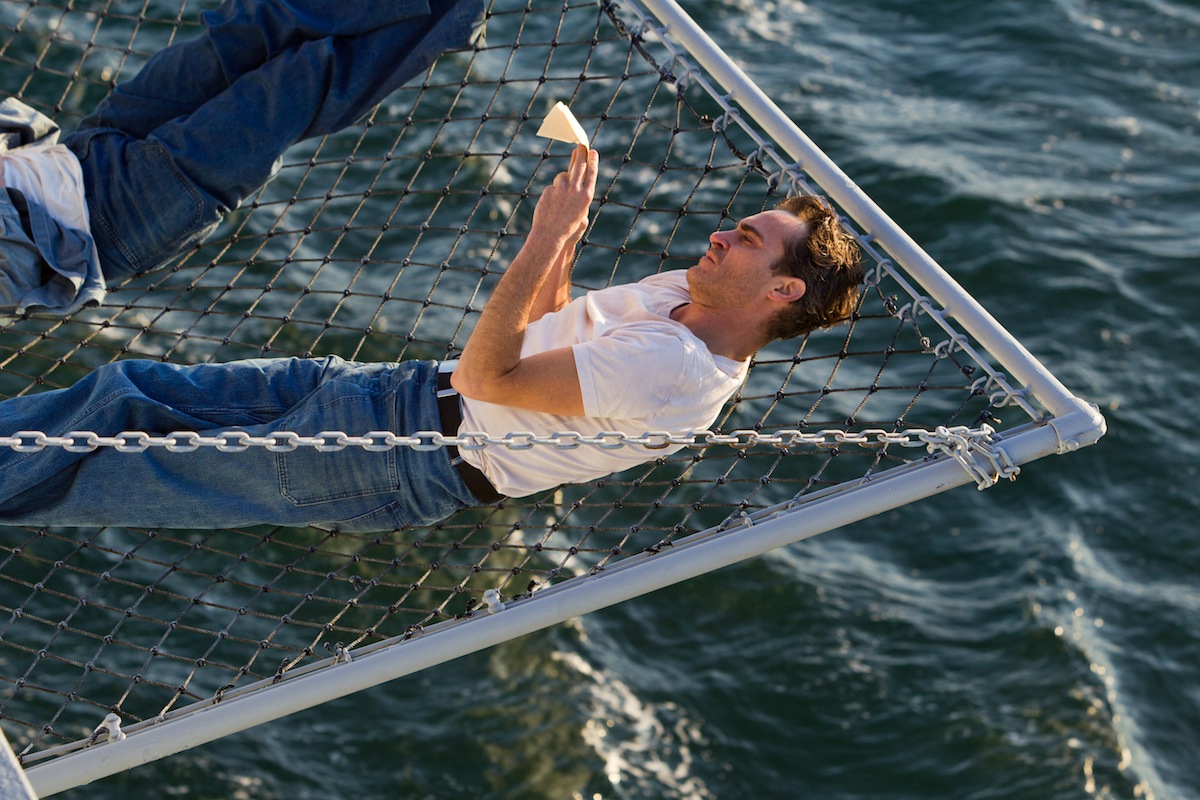 “This is something you do for a billion years or not at all.”

There’s much declaimed about mind and matter and devotion to ideas, ideas that will weather time, in “The Master,” and the teeming result is crafty, chunky delight, an enigma of ape and ego. Writer-director Paul Thomas Anderson wrestles with man-vs.-animal in eccentric, compelling, outrageously plush fashion: it’s not just about L. Ron Hubbard and the roots of Scientology, as was rumored before the film’s release. It’s most particular about sterling, physical performances from Philip Seymour Hoffman and Joaquin Phoenix as battling, wrestling embodiments of flesh and philosophy.

Set in the early 1950s, “The Master” quickly etches the alcoholic abandon of sailor Freddie Quell (Phoenix) before placing him in the orbit of a man whom family and acolytes call “The Master.” At first meeting, bearing a red pencil and wearing a red dressing gown, Philip Seymour Hoffman’s face blushed to lobster red, The Master recognizes this shifty character as more than a transient to traffic with, his project, his grail, his doom, his liege, his love, his “silly, silly animal.” (They bond over quaffs of Quell’s signature pour, a particularly flammable, inflammatory Long Island iced tea comprised of endless medicinal quaffs of paint thinner and such chemicals damped through heels of bread.)

“You’re the bravest boy I’ve ever known,” is one of many memorable, belittling endearments “Master” issues to his singular and ultimate protégé. “Don’t apologize! You’re a scoundrel!” He’s practically beaming after one of Freddy’s frenzies of violence: “Naughty boy, okay! All right?”

Anderson’s screenplay demonstrates a deep concern for its historical inspiration: readers of lore of L. Ron Hubbard’s personality may be amazed at how familiar some details and notions are. Hoffman brings an eager purr to “Would you care for some informal processing?” which leads to a rapid-fire variation on the earliest questions of the Dianetics personality test: “Is your life a struggle? Do you like being told what to do?” I don’t know how long the rat-a-tat fires away, but the pair performs furiously in a duet of banter and battering. The movie’s actually sympathetic to the wild hopes and ambitions and simple failings of Lancaster Dodd, who is seldom referred to as anything but “The Master.”

As the movie begins, the frame bursts with an image that will recur and persist: a gentle slurry of foam that slicks the emerald and azure sea: the coursing of memory. Warm, embracing, drowning, consuming: memory. Can you control it? Does it control you? (There are volumes to be inscribed about the visual control of Anderson and his crew, especially cinematographer Mihai Malaimare Jr.)  As the two-and-a-half hours of mentor-protégé human experiences revolve around the two men’s mano-a-mano, the performances are more physical than psychological. Hoffman’s substantial frame is square-shouldered like the shoulders of the period suits: he could be Hubbard, and Elmer Gantry, and Orson Welles, the character and his Wellesian inflatables, as he invokes increasingly combative banalities to explain the universe and increase his flock. Phoenix discovers ever more remarkable ways to sort and mass his mouth and jaw, more than even Rodin found to sculpt the human shoulder at stress. There’s simian stutter to his misshapen gait, as if shrapnel pierced him at each and every insistent masturbatory thought. This is a carnival of gestural extremes.

Explanations are pared away; background for “The Cause” that “Master” represents is implied, hardly ever explained. Motivations of secondary characters are elided. There’s hardly a force onscreen beyond Master and Freddie. Yet Amy Adams, as Master’s wife, has three scenes that prove her to be a “master” in her own right in the emotional equations. (Husband and wife have an especially close morning moment in front of the bathroom mirror that contrasts power and weakness.) There is seething tumult in the control Adams brings to an unexpected peroration that goes something like, “This city is noise. Just noise and bad living. I know this place. I know its rotten secrets.”

Rotten secrets are also Master’s obsession, as is believing that man has a higher place than the “vessel” in which we move through our lives. “Man is not an animal,” Master insists in proclamations, “Man is an eternal spirit.” His combat on behalf of “homo sapiens” entire is eventually reduced to wrestling, denying his own urges. And, at each greeting, literally wrestling Freddie himself. Freddie, on the other hand, is simple, rambunctious recklessness. (The pair readily line up as a paragon of simplified ego-vs.-id: Release the Freudians!) Freddie can’t, won’t deny his urges. “I am many things,” Master intones, Hoffman mastering a chaw of marbled hubris, “I am writer, a doctor, a nuclear physicist, a theoretical philosopher. Above all, I am a man. A hopelessly inquisitive Man, just like you.” Who is the greater Man? The one with the examined life? Or the unexamined one?

“The Master” is sympathetic to its characters’ vanities, and failures, and flights of most fanciful hope, and suggests there is no truth unless you embrace rutting the very earth itself. As well as the mad yet genial observation: what a keening slab of stress and distress is man! And what a wailing mass of fixation and intrigue is “The Master.”

“The Master” opens wide in the Chicago area; on Friday in DCP digital and 35mm. A future engagement in 70mm at the Music Box is tentatively planned. The trailer for its Music Box premiere is below.