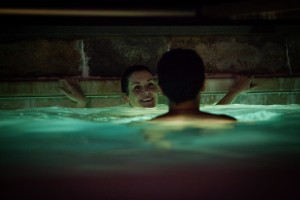 Melanie Lynskey carries this Sundance-backed and -blessed study of one Amy Minsky dragging herself back to a life of sorts, after her husband in New York City divorced her. As if self-sentenced to house arrest, she sleeps in real late at her parents’ coastal Connecticut home. It’s on the market and her lawyer dad, a fan of the Marx Brothers film with a line that supplies this film’s title, is sweating the last big deal of his career. Amy’s feckless summer fling could screw up all that. Directing an empathic screenplay by Sarah Koskoff with cynical slivers, Todd Louiso deals with another life on hiatus, as in his “The Marc Pease Experience” (2009). But goes less dark than in “Love Liza” (2002), where the husband of a suicide self-medicates with gasoline fumes. Somewhere in her thirties, Amy carries on with a nineteen-year-old vegan named Jeremy (Christopher Abbott), an actor already on a career path. He once played Robert Mapplethorpe. His next gig is doing Walt Whitman. He is not secretly or openly gay. He’s just cast that way. He no longer wants to keep acting out the lie that he likes acting, period. Oberlin College is where he heads at the end. For her own breakthrough, Amy will rethink her unfinalized divorce in monetary terms. Lynskey’s performance as a caustic self-deprecating depressive is winning, even if the script defaults to minor notes in its après-fling denouement. With Blythe Danner, John Rubinstein, Dan Futterman, Julie White. 94m. (Bill Stamets)

“Hello, I Must Be Going” opens Friday at Landmark Century.