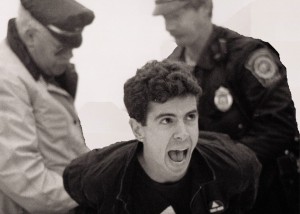 David France’s tour-de-force survey of a wealth of largely unseen footage drawing from work by over thirty videographers from the early days of the AIDS crisis is wrenching, enthralling, visceral, enraging. The contemporary quality of the 1980s-era footage doesn’t allow distance or nostalgia. Beginning while AIDS was nearly 100-percent fatal and no drug treatments were foreseeable on the horizon, the combination of stories and faces and figures wasting away, “How To Survive A Plague” punches straightaway. The story that follows of the founding of protest groups ACT UP and TAG (Treatment Action Group) is compelling in its own right. Talking heads are gracefully placed. And, enough time (and deaths) have passed that a shapely overview is possible, leading, with hopefulness, toward an affirmative conclusion. 109m. (Ray Pride)

“How To Survive A Plague” opens Friday at the Music Box.