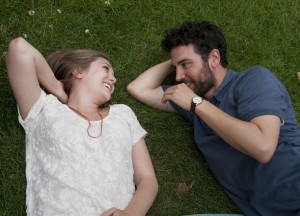 Zach Braff, where have you been for so long? It’s great to have you b— Oh. “Liberal Arts” was made by someone else? Writer-director-star Josh Radnor, co-star of “How I Met Your Mother,” who made the suffocatingly-titled “Happythankyoumoreplease” (2010)? Yeeks. I could’ve sworn— Radnor plays a stalled thirty-five-year-old admissions counselor who returns to his college campus upon a favored professor’s retirement, only to meet a “Zibby,” or Zibby (Elizabeth Olsen), a sophomore improv theater student who could well lift him out of his slump. Sensitive male feel-goodery rushes the screen: even the great Richard Jenkins fails to rise above the ticklish, cutesy comedic stylings. (Nobody feels like an adult. That’s the world’s “dirty secret” gets a fair reading from the genially great lion.) Olsen? So far in her career, she seems like she can do no wrong, at least except for some of her film choices. Cuddly banalities are swapped, and occasional line deliveries come to life, as Olsen’s delivery of “It’s just as hard, and annoying, to be young as it is to be old—I’m assuming—not that you’re old, ‘cos, y’know, you’re not.” Assuming. Quieter, a single word spent slightly nasal, ever so presumptuous. Gorgeous. But her character? “I’m old-fashioned,” she’s an old soul, etc. While the age difference is not as egregious as your ordinary, run-of-the-mill academic-to-child man-to-girl telling—it’s not Al Pacino positioned against Olsen—this is still the stuff of Sundance “indie” fluff. How I fucked your undergrad? No, no, not hardly. He bucks up. He mans up. Radnor twinkles into that good night. Radnor press-notes his sentiments this way: ” If we’re to step into our lives in a vital and engaged manner, we must both bless our past and bid farewell to it.” Sweet, okay, good. But “Zibby.” Fuck. With Allison Janney, John Magaro and Zac Efron as a hippie. 97m. (Ray Pride)