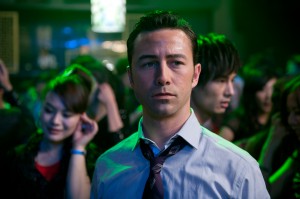 In Rian Johnson’s fine and fantastic “Looper,” a man in the near future confronts men from the farther future and dispatches them from the face of the earth. It’s a savvy variation on the hitman genre and a magpie fashion of gently-brushed-in science fiction that manages to entertain in its small details of the everyday while proposing and prompting notions about our existence in the eternal now, the split-second we’re always holding, losing, anticipating with each breath and fleeting thought.

I think old Tom got it first and got it best, but Johnson is oh-so-very-close with his fine and fantastic third feature. “Old Tom” would be T. S. Eliot, and the poems would be those of “Four Quartets.” There was much drop of jaw while watching “Looper,” but it was not too far in when I remembered a single, singular, exquisite, simple passage. Stories about time travel open onto corridors of paradox, and “explanations” readily detonate. The most soothing passage I know about movies working Möbius rubber-band strips of time travel is part of a poem: “Time present and time past / Are both perhaps present in time future, / And time future contained in time past. / If all time is eternally present / All time is unredeemable. / What might have been is an abstraction / Remaining a perpetual possibility / Only in a world of speculation.”

That poetry and simplicity and directness and playfulness is in the intricate weave of “Looper,” and Johnson and I talked about that and the movie’s inventive world during the Toronto International Film Festival a couple of weeks ago. The noir element—with “gunsel”-style slang sketched in—is enough to intrigue you, but it’s not full-on satire or pastiche. It becomes part of the characters’ varying levels of self-awareness, but there’s not so much of it that you’re going, “What is the which of the what?” It’s the same with everyday objects and their weapons. “I hope so,” Johnson says. “I figured there was so much for the audience to absorb anyway in that first half hour, where you’re asking so much of them, that a lot of the ‘world’ elements, I wanted to be able to telegraph, I wanted to be able to shorthand. Luckily, sci-fi is something that lets you do that because we’ve all grown up watching sci-fi movies. Even the world, we tried to put some touches in there that, hopefully, it’s a unique world, but at the same time, it’s deliberately a world that we’ve seen other versions of before. It’s a near-future dystopia, with cell phones that are not so totally out there that you have to wrap your head around what they’re doing, there are only two types of guns in the movie, so ideally you instantly get loopers have blunderbusses, the gat men have gat guns. The gat men, the choice to put them in those overcoats, that, to me, was just, what’s the most recognizable signal we can give that these guys, these are gangsters. Let’s just do that. It was just figuring out what required the least amount of brain power for the audience to recognize these things and orient themselves.”

And they would have been guys who watched “The Matrix” a hundred times growing up in the 2020s and 2030s. “Exactly! I like that. I like the fun aspect of playing with the nostalgia of these guys themselves.”

Red is a primary component of “Looper”‘s design, as bold as red paint for blood in Godard’s 1960s movies. But it’s everywhere, sometimes more elemental than the blood in the loopers’ executions of their targets from the future. It’s right in your face, but it’s part of the world, from Joe’s retrofitted red Miata to a red neon arrow in a nightclub hallway that will eventually contain a mass shootout. “I remember really clearly in the film ‘Fargo,’ becoming obsessed with that film and looking at the very intentional and very distinct uses of pure red, which just jump off the screen, especially in those banal settings. I started reading a lot into those and got really obsessed! So making that kind of big, bold use of color and have it all lead somewhere… you hope it has some kind of effect at the end of the day.”

Johnson once told me that the opening of ‘Brothers Bloom” is in verse—”That five minute sequence that’s in rhymed, metered verse, yeah”— but there’s a great poet, some lines I remembered, that are as much elemental science fiction as, say, Ray Bradbury. “If all time is eternally present, all time is unredeemable, what remains is an abstraction remaining a perpetual possibility only in a world of speculation.” 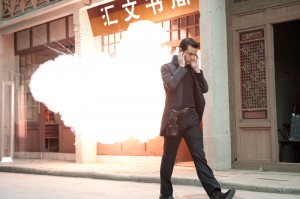 There’s a nice, fat pause. “You know, it’s funny. Actually, in the screenplay, I had it divided into four sections, and I intro’ed each of them with a quote from each of the ‘Quartets.’ Time present and time future, yeah, are both present… I haven’t talked about it much because I didn’t want to go down that rabbit hole, but ‘Four Quartets’ was something I was drawing directly from, a lot of inspiration when I was writing the script.”

It’s not a proof, not an exercise of logic, but it brings such a voice to the essential, unsolvable conundrums of time travel in fiction. “I think that’s something that sci-fi is good at, it can let you reach for those things in a way that is more acceptable to our modern perception of the world, it’s glazed with this thin layer of science, it gives us back this ability to reach for gods and monsters.”