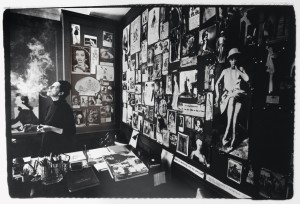 “Diana Vreeland: The Eye Has to Travel” is a worthy, gleaming monument to the blissful mad and uncommonly acute mind behind classic years of the twentieth-century incarnations of Harper’s Bazaar and Vogue magazine, “D. V.,” or “Mrs. Vreeland” as she was known, and “the one-and-only fashion editor,” she dubbed herself. Shot with all the access being the wife of the grandson of your subject would offer, Lisa Immordino Vreeland and co-directors Bent-Jorgen Perlmutt and Frederic Tcheng offer a teeming portrait of a woman whose philosophy was, “Give people what they don’t know they want yet.” There are exhibitions and a book tied into the film, but it stands on its rollicking own. Voice-overs are drawn from transcripts of her extensive interviews with George Plimpton, and the “pizzazz” is intoxicating. Among the apercus: “You can see the approach of revolution in clothes… You can see everything in clothes”; “I loathe narcissism, but I approve of vanity”; and Barbra Streisand and “that Nefertiti nose of hers.” I don’t know about wearing violet velvet mittens with everything, but Mrs. Vreeland earns a sustained look-see and listen. (Nods are made to her relative neglect of family.) Aside from ample eye-pops of archive footage, the vivid and unusual suspects on camera include Ingrid Sischy, Lillian Bassman, Ali MacGraw, Rae Crespin, Richard Avedon, Anjelica Huston, John Fairchild, Oscar de la Renta, David Bailey, Anna Sui, Joel Schumacher, Diane von Furstenberg, Veruschka von Lehndorff, Manolo Blahnik, Marisa Berenson, Lauren Hutton, Tai Missoni, Calvin Klein, Bob Colacello, Reinaldo Herrera, Simon Doonan, Hubert de Givenchy, Philippe de Montebello and Carolina Herrera. It’s almost like a magic trick: a fat fall issue of Vanity Fair opened and blooming not into a waft of clashing scent strips, but a bouquet to a life fantastically well-lived. 86m. (Ray Pride)

“Diana Vreeland: The Eye Has To Travel” opens Friday at the Music Box and Highland Park Renaissance. The trailer is below.