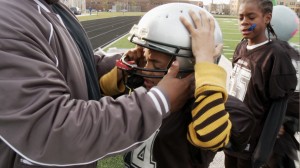 “It’s been known for a long time that banging your head over and over and over and over again can be a bad thing.” Steve James’ latest documentary, “Head Games,” on the science of sports and head injuries, is a restless, relentless chiller about the level of violence in American sports, from the schoolyard to the NFL, a public health issue that has hardly been addressed in the public sphere. One in eight boys in America? “Playing Russian roulette” with their future? “Your brain is spongecake floating in a bone-bucket” is how Stephen Colbert puts it. “Stop now while you don’t have to wear a diaper.” “Being a warrior without going to war” is how former wrestler (and Harvard graduate) Chris Nowinski puts it. Head trauma. Disorientation. Concussions as part of the game. Neurological degeneration. Suicide. The case is made, and in extremely entertaining fashion. The chorus of voices who have been affected by sports concussions relates the circumstances in brisk and humane fashion: it’s not all numbers, but the numbers appall. It’s speedy, heart-wrenching stuff, reminding that good and proper documentary editing is more than flash and fill-in, unlike any no-budget late-night D-level cable network exploitation unreality TV: it’s rhythm built off what the filmmakers have carefully and painstakingly discovered and observed. Inspired by Nowinski’s “Head Games: Football’s Concussion Crisis.” Scored by Billy Corgan. 96m. (Ray Pride)

“Head Games” opens Friday at Siskel. Steve James will appear at the Friday 8pm and Sunday 5:15pm. The trailer is below.