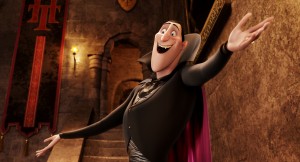 Genndy Tartakovsky (“Samurai Jack,” “The Powerpuff Girls,”  “Dexter’s Laboratory,” “Star Wars: Clone Wars”) directs a smart and smart-alecky screenplay by Peter Baynham and Robert Smigel about a vampire teen stretching her bat wings. She kisses a non-vampire and sucks not a corpuscle. Mavis (voiced by Selena Gomez) wants to get out of gloomy Romania and go to the sunny spot where her father Drac (Adam Sandler) first met her late mother, as pictured in a faded postcard. Home-schooled with too little geography, she pronounces “Hawaii” like the “Wii” game platform. That’s typical of the popcult bits, alongside a werewolf upset at the depiction of his kind in “Twilight.” Mavis’ candidate for a traveling companion is backpacker Jonathan (Andy Samberg). This open-minded non-monster finds his way to the title hotel, a family resort Drac built for monsters and monsters only. To not panic the guests he invited to his daughter’s 118th birthday, Drac makes Jonathan fake it as a member of the Frankenstein clan. “Hotel Transylvania” makes nice with a multiverse of monsters. Narrating a “Know Your Enemy”-style slide show, Drac demonizes all the tacky obese humans who killed his dear wife in one of their pogroms. Universal human and monster rights are not on the agenda of this 3D comic animation, as chaotic action sequences victimize eye, ear and equilibrium. Additional voices by Kevin James, Fran Drescher, Steve Buscemi, Molly Shannon, David Spade, CeeLo Green. 92m. (Bill Stamets)