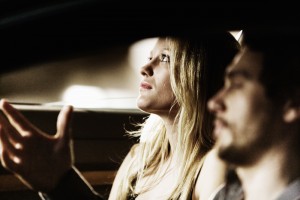 Writer Stephen Elliott’s feature directorial debut is ever so sneakily about how we invest ourselves in how we see others. While “About Cherry” unfolds against the backdrop of the introduction of Angelina (Ashley Hinshaw)), a blonde eighteen-year-old with a killer smile, to the online porn industry of San Francisco, there’s a reason it’s called “About Cherry” and not “About Angelina”: in one form or another, everyone she encounters, from her puppy-dog roommate (Dev Patel), to her baleful, know-it-all harridan alcoholic mother (Lili Taylor), to Francis, a rich lawyer with a drug habit (James Franco) to Margaret, the director who brings out the spark in her (Heather Graham) to the director’s girlfriend (Diane Farr), no one sees Angelina: it’s Cherry, it’s always the threat of cherry, and no one can top that. The movie, nonjudgmental, pro-sex, pro-porn, more offhand than touristic, takes its sidelong time getting to its conclusion, which is neatly satisfying rather than the pat button it could have been. There’s a bit of skin, a few dollops of action, a handful of blunt lines, but nothing that would embarrass the average American laptop (although there is a lesbian couple’s splendid hatefuck on a kitchen floor late in the game). Elliott, editor of The Rumpus and author of seven books, including “The Adderall Diaries,” co-wrote the screenplay with Lorelei Lee, who is credited as “a porn performer who is also a writer and lecturer at New York University.” 102m. (Ray Pride)

“About Cherry” opens Friday at the Music Box. Elliott will appear before the late screening with his books, as well as for a Q&A afterward moderated by Newcity film editor Ray Pride. A trailer is below.