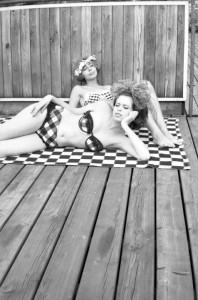 Eastern Europe: my, what large film vaults you have. A singular treat of film restoration is Criterion-Eclipse-Janus Film’s gorgeous new 35mm print of “Daisies” (Sedmikrásky), Vera Chytilová’s aggressive, over-the-top, under-the-radar 1966 Czech New Wave, surreal, sexy, socialist pre-Prague Spring daydream: artful anarchy rules with bonus “mod” pop-art eyeball-kick fashion. Two collage-mad, scissors-happy teenage sisters, Jarmilla and Julie, set out to redeem the world from having been “spoiled,” and feminist theory may never have been so consummately crafted as entertainment: hello, Dada. (In “The Story of Film,” Mark Cousins compares one passage to “the Lumière Brothers on acid.”) Free-and-easy shifts in color, tint and tone announce themselves from the first minutes and do not let up. Chytilová, now eighty-three, has made other films, but what a full-to-bursting free-for-all “Daisies” is.  76m. (Ray Pride)