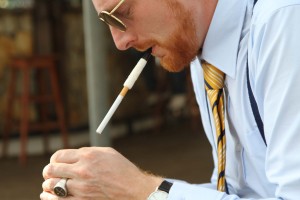 “I am a respectable Danish journalist…” Mad Mads Brügger is Danish documentary’s biggest bomb-thrower (at least until the fantastically overstuffed and horrifying “The Act Of Killing” is released next year). After infiltrating North Korea as part of a professed improv comedy troupe, in “The Ambassador,” the filmmaker buys diplomatic credentials to uncover how easy it is to become a central African blood-diamond trader under political cover. Financed by Lars Von Trier’s co-owned company Zentropa, “The Ambassador” plays no favorites in its undiplomatic political incorrectness, working with hidden cameras and a zest for saying the most inopportune things at just the right moment. As a Liberian paper put it recently, “Presidential Press Secretary Jerolinmick Z. Piah said the issue is of grave concern to the President, and she has called for a full investigation…The Government of Liberia said [Brügger’s] action was not only immoral but criminal and offensive to the Government and people of Liberia.” It seems like a surprise this gleeful gonzo is even alive, at least until you see him in action in the film. Mad! “If you can mix business and politics, wonderful things can happen,” a thug tells him, and the mind immediately leaps to what could be said between emissaries and moneymen behind billionaires’ closed doors. Forty-seven percent? This filmmaker is the 100 percent: for a picture of Brügger, consult your film dictionary under “Balls.” 93m. (Ray Pride)

“The Ambassador” opens Friday at Siskel. The trailer is below.