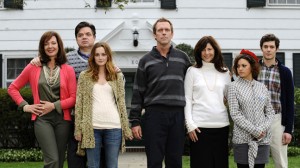 There’s no such thing as an over-familiar story. There’s just a story that its creators haven’t figured out a way to make fresh or new, or valuable, or even valid. There is “The Oranges.” British director Julian Farino’s 2011 comedy sets suburban New Jersey next-door neighbors on each others’ throats and our nerves when a black sheep returns for Thanksgiving. And boy, isn’t a teenage protagonist’s explanatory voiceover always welcome, just to clarify the muddy waters just a little? It’s a terrible, terrible film that thinks it’s funny when it’s just crass, and makes a convincing case that it’s really, really simple to waste a cast the likes of Catherine Keener, Oliver Platt, Allison Janney, Hugh Laurie, Leighton Meester, Alia Shawkat and Adam Brody. Broad comedy? More like a “board” comedy, as in a two-by-four upside the head. Painful. Pitiful. Oh my. The bizarrely misjudged music by Klaus Badelt and Andrew Raiher is like having a stranger spit into a wound. 92m. (Ray Pride)

“The Oranges” opens Friday at Landmark Century and Renaissance.