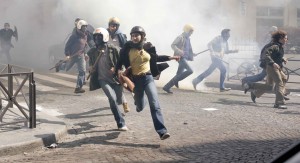 “Something in the Air.”

“The Festival of Festivals” was what Toronto called its film festival back in its beginnings thirty-five years ago, but looking at the offerings of the forty-eighth Chicago International Film Festival, that could apply to its attractions over the next couple weeks of October. While Toronto, the world’s largest film festival open to the public, showed over 350 features this year (and where many local reviewers get their first glimpse of festival season), Chicago tops out at about 150, from fifty countries. It’s a cliché, but you can’t help but create your own festival of festivals, however diligent with schedules and free with cash and flexible with time you may be.

First-week recommendations: if you want a small sample of the seventy-one features in competition for Best Foreign Language Film, you can choose from Mexico’s “After Lucia,” a study of high-school bullying; Cristian Mungiu’s “Beyond the Hills” from Romania, a story of nuns at work in austere circumstances; and Canada’s “War Witch,” about an African girl kidnapped and forced to fight in war at gunpoint.

Sixty-seven-year-old David Chase has spent the five years since “The Sopranos”‘ cut to black on his first feature as director, “Not Fade Away,” an impressionistic 1960s rock ‘n’ roll coming-of-age tale; Chase is telling interviewees that television no longer interests him. Candidates from Cannes include Leos Carax’s first feature in too many years, a one-man dream of cinema past and future, “Holy Motors”; Oscar-predicted Aboriginal girl-group musical “The Sapphires”; Abbas Kiarostami’s let’s-take-a-drive-around-Tokyo “Like Someone in Love” and Ulrich Seidl’s coldly dispassionate gaze upon Austrian female sex tourists in Africa, “Paradise: Love.”

Documentaries include the from-the-deep “Leviathan,” with the filmmakers of “Sweetgrass” taking tiny cameras and dipping into the sea during fishing expeditions, taking on the point of view of men, machines, fish and gulls. In “Mea Maxima Culpa,” Alex Gibney takes on pedophiles in the Vatican; and Ken Burns co-directs “The Central Park Five,” about a racially charged crime in New York that’s still an incendiary subject.

On a more bracingly indie level, “Keep the Lights On” is Ira Sachs’ bold, biting, often darkly funny portrayal of several years in an ever-unraveling relationship between two men in New York, beautifully photographed by Greek cinematographer Thimios Bakatakis. Can a $100-million film be “indie”? In the case of Tom Tykwer and Andy and Lana Wachowskis’ “Cloud Atlas,” yes. Adapting David Mitchell’s compelling, idiosyncratic, century-spanning novel, the three directors envelope his concerns with their own and arrive at a meeting of worlds greater than the sum of its parts. My favorite of the week’s films is Olivier Assayas’ memory piece, “Something in the Air,” which works with the fluent impressionism of memory to capture his own late-teen years, when drugs, sex, political revolt and a really incredible vinyl collection marked the culture. It’s also a coming-of-art story, of how his character, and by turn, he himself, became the filmmaker he is today. A dreamy dream, plus Syd Barrett songs. (Ray Pride)