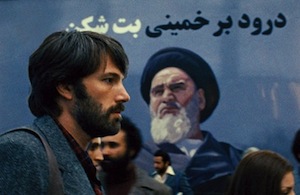 While “Argo,” Ben Affleck’s Iran-hostage suspense-thriller-slash-sardonic Hollywood backstage comedy, leans backward toward superb 1970s filmmaking—he’s repeatedly cited the influence of the clinical “All the President’s Men,” Cassavetes’ seedy “The Killing of a Chinese Bookie” and the joyfully profane “Slap Shot,” among other fine feature films—it has snap and punch that make it a distinctly contemporary enterprise, a brisk, commercial thriller that rises above pastiche. Chris Terrio’s script is confected from a long-classified true story about a long-secret parallel 1970s Iran hostage crisis, the one with a happy ending, thanks to Canadian diplomats in Tehran (depicted here as kindly hosts with ever-pouring hard liquor). Oscar-winning screenwriter and third-time director Affleck, now far from Boston Yard, is adventurous from the first scenes, when a montage places the historically fraught relationship of Iran and the United States in context and moves quickly to an adroit depiction of the rushing of the Embassy by protestors and the capture of fifty-two Americans. But there’s more to “Argo” than the gamesmanship of diplomacy, when Tony Mendez, an expert in “exfiltration,” played by Affleck, arrives to plot the extraction of the six Americans confined to the smaller embassy. In a turn more sardonic than sarcastic, the extraction plot involves the creation of a non-existent film project, from a rotten script called “Argo,” with the help of an older producer played by Alan Arkin, whose office holds a “Cannes Jury Prize 1948,” and a makeup man from “Planet of the Apes” movies (John Goodman). (“Brace yourself, it’s like talking to the two old fucks in the Muppets.”) They promise “a cosmic conflagration” with their fake movie, a “Star Wars”-“Flash Gordon” ripoff meant only to get an extraction crew across the border and back. Alternating their comic machinations with the Tehran plot is a delicate dance, but Affleck finds the tone, as well as offering up a mash note to Jimmy-effing-Carter. (Scenes in Tehran, D.C.  and Los Angeles are lit and designed in quietly distinctive styles.) Bonus points for enlisting Iranian filmmaker Rafi Pitts both as consultant and in a small role as a grave-eyed consulate factotum. (There is a famous shot of Iranian cycle gangs rumbling over an American flag that fills a street that is present in both “Argo” and Pitts’ “The Hunter.”) The dialogue is knowing and profane—”Carter’s shitting enough bricks to build the pyramids”—and voices of newsmen, past or passed, crackle throughout: Ted Koppel (whose rise to highest fame came during the hostage crisis), Walter Cronkite, Frank Reynolds, David Frost and Mike Wallace calling the head Imam a “lunatic” to his face. Expect much in the way of period facial hair. The cinematography is by Rodrigo Prieto (“Brokeback Mountain”) and the score by the ubiquitous but canny Alexandre Desplat. Somewhere the likes of Alan Pakula, Sydney Pollack and Matt Damon’s family friend Howard Zinn are smiling. With Bryan Cranston, Victor Garber, Tate Donovan, Clea DuVall, Scoot McNairy, Rory Cochrane, Christopher Denham, Kerry Bishé, Kyle Chandler, Chris Messina. 120m. Widescreen. (Ray Pride)