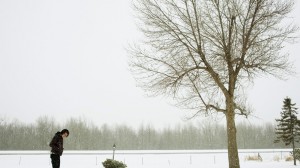 So Yong Kim’s third feature is steeped in unexpected melancholy, especially once you’ve heard that the film is about the tribulations of an about-to-be-divorced, failing heavy-metal musician, Joby (Paul Dano), as he works to reconnect with his six-year-old daughter (Shaylena Mandigo) in winter-swept upstate New York. But as with her earlier “In Between Days” and “Treeless Mountain,” Kim fixes on a figure and lets landscapes grow around it. In this case, it’s Dano’s sapling-elfin form and softly wizened pained expressions. Dano isn’t to everyone’s taste, but there are notes he strikes here, alongside disparate roles in “Ruby Sparks” and “Looper,” that elevate the brute mood that surrounds Joby as surely as the cloud of flies and dust in Charles Schulz’s Pigpen character in “Peanuts.” While Kim’s minimalist visual style, hewing strictly to Joby’s point-of-view, deals in the deliberate, seeking calm and grace, Joby is met with further chances at failure, as well as compromises he can’t fathom how to make. The tribulations of Joby eddy outward. With Jon Heder, Jena Malone, Margarita Levieva. 93m. (Ray Pride)

“For Ellen” plays Friday-Tuesday and Thursday at Siskel.