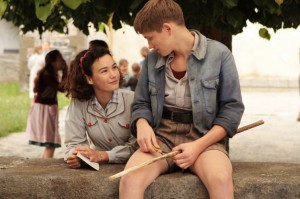 Aspects of “The Chorus” and “Paris 36” pleased me, but I wanted to flee about four minutes into Christophe Barratier’s latest sentimental tale of childhood in France. The trite music in “The War of the Buttons” instantly sweetens a picturesque countryside traversed by two cute brothers heading to school in April 1944. Originally titled “La nouvelle guerre des boutons,” this film is the fifth adaptation of Louis Pergaud’s 1912 novel. Rabbit-poaching lads from a “Nazi-loving” village start the title war by lobbing the insult “limp dicks” at boys from a nearby village, who retaliate with “picky asses.” Helmeted with kitchen colanders and armed with wooden swords, they go to war. Victors cut off the shirt and pants buttons of victims, like taking scalps, to keep score. Their game turns more serious when they mobilize to save a new Jewish classmate from Paris. Barratier builds in bad analogies about Lebensraum and public shaming of collaborators to come with Liberation. With Jean Texier, Ilona Bachelier, Laetitia Casta, Guillaume Canet, Clément Godefroy, Théophile Baquet, Louis Dussol. 100m. (Bill Stamets)