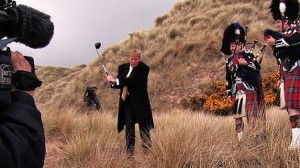 It’s easy to think no one likes Donald Trump, and “You’ve Been Trumped,” a roiling, go-for-the-throat exposé by first-time filmmaker Anthony Baxter, offers no evidence of soul or charity from the alleged billionaire/full “Birther”/inspirational speaker-for-pay to change one’s opinion. Liar? Bully? Baxter’s got that. As he and his son prepare to demolish land held by families for generations in wilderness environments of Aberdeenshire, Scotland, near windswept beaches, resistance grows. (An eighty-eight-year-old woman murmurs, “Trump people. They’re horrors.”) Parallels to Bill Forsyth’s great “Local Hero” are not lost, and in fact, footage from the film arrives at the right moments, but Baxter cannot offer a starry, bucolic ending, as did Forsyth. Trump’s greed and hubris are on shameless display, as is his contempt for the locals who border the 1,400 acres he bought for his fiefdom. “For people to have to look at this virtual slum is a disgrace. I happen to be a very truthful person, and he lives like a pig. The property is terribly maintained, it’s disgusting.” The inveterate Twitterer did offer a few words about this angry, infuriating documentary about his since-successful campaign to destroy a patch of Scottish seaside with an ever-so-not-tasteful golf course: “I heard it was boring. I heard it wasn’t good.” The proof is in the off-putting: it is pretty good. More than that: it’s damning, of Trump’s obliviousness to all not under the shade of his comb-under-over-and-around, of complacence from local citizenry, of Trump himself who inescapably becomes symbol of all that is arid in the buddy-boy stratospheric reaches of money and politics in America, and exported across the planet. It’s a horror movie in its own class; Call it “Normal Activity 4ever.” 100m. (Ray Pride)

“You’ve Been Trumped” opens Friday at Facets. The U. S. trailer is below.