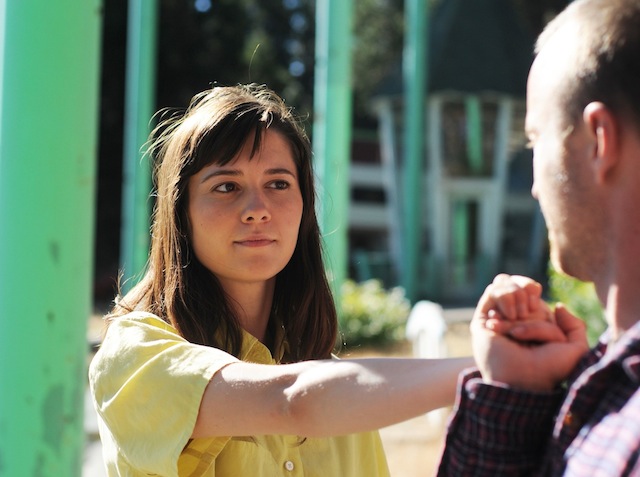 There’s this thing called state-dependent recall: you fall in love drunk in a bar, you ought to be prepared to stay drunk to stay in love.

That tavern truism sings through James Ponsoldt’s “Smashed,” a light-on-its-feet drama of a star-crossed Los Angeles couple next door, happily married and boozily adrift, until one day she realizes she’s crossed a line. Tactile and breezy and specific and funny and nonjudgmental, it’s a small-budget film with the largest of hearts. Part of that is Mary Elizabeth Winstead as Kate, an exuberant partier and schoolteacher of small children, twentysomething, dressed in an Angelino uniform of long dresses and bare legs and flip-flops in eternal, infernal California climatic temperance. (In a moment of clarity, she describes smashed Kate: “I would piss my pants and would still be cute.”)

“We say a lot of times that it’s a love story and a coming-of-age story, it’s a portrait of a marriage seen through the eyes and experience through the eyes of the wife,” Ponsoldt tells me. “They’re closer to thirty than they are to twenty but they’re emotionally stunted because of the drinking. For a long time, their emotional growth stopped.”

Both of these characters have the capacity to be a Peter Pan of all trades, I joke. Director-co-writer-Ponsoldt laughs. “Those are the best people, right? They’re the most lovely and the most charming and they’re great at parties and they break your hearts. Certainly entertaining.”

The drama, the accumulation of events, is sketched through plausible behaviors, but the best thing is the crispness of the characterizations down the line. Aaron Paul plays Charlie, her husband, who sees no reason to change his path; Nick Offerman is fantastically nuanced as the vice-principal as well as program follower; Octavia Spencer plays a been-there sponsor and Megan Mullally strikes society’s chords as the nosy, needy principal. “I think my favorite film,” Ponsoldt begins, “I mean, when people talk about the Lubitsch touch, when Wilder and people after him were describing that, there’s a lot of that that has to do with tone and really understanding story, a delicate balance of humor and sadness, say, the way Walt Disney did, the way his writers did it, they’re prime. I think a lot of it is a gift of generosity of spirit toward an ensemble. You watch ‘The Shop Around the Corner’ (1940), yeah, it’s a love story where they meet, they come apart, they go back together and it’s a beautiful sort of orchestration, but every single character, whether they get one line or two scenes, or they carry the movie, they each feel like they could have their own film. They’re wholly dimensionalized. It’s a charity toward the characters, no one is disposed of in an uncharitable fashion.”

Wallace Shawn was in Alan Rudolph’s “Mrs. Parker and the Vicious Circle,” playing a hotel clerk that no one notices. He’s asked what his role in the movie is, he doesn’t talk about Dorothy Parker or the Algonquin Roundtable, he says, “He’s this serious guy with a lot on his mind that everybody treats like an asshole.” “Right,” Ponsoldt says, “that speaks to the nature of whether someone is a planet unto themselves or a moon in orbit around it. In ‘Manhattan,’ to Meryl Streep, Wallace Shawn is a great lover. And to Woody Allen, he’s just this ‘homunculus.’ It takes a certain kind of man to be a homunculus to Woody Allen, right? I mean, Nick’s character makes a really, really, crossing-a-boundary, offensive comment but the film allows him to be redeemed and human, and more importantly, for Kate, our main character, it speaks volumes about how she responds, she’s not a total hypocrite, cut him completely out of her life. She maintains some kind of relationship.”

As for Winstead’s Kate, you simply get the feeling: this is someone you know, not necessarily from particulars of behavior or misbehavior, but how vested she is in the role. It was there on the page, Winstead tells me. “This film was pretty much in the script except for a couple of beats that we found on the day. I met with the producer and I wasn’t aware of what projects he was doing [then], but I was aware he was doing things that were really small and performance-focused and that he was discovering new filmmakers. So I simply wanted to meet him for that reason. He sent me the script and I instantly was like, these characters are totally human and flawed and complex and this is what I want to do, this is what I need to do, this is the kind of project I need to do in order to challenge myself into becoming a better actor. So I immediately called him and said, ‘what do I do to at least be considered for the part?’ He set me up with a meeting with James and we talked for a couple of hours. After that, I took it upon myself to do an audition tape, picked out like six or seven scenes and still was kind of ready for the fight, like I was ready to get in there and fight some other actresses to get the part,” she says, laughing. “And James saw the tape and cast me off it without reading anybody else. It’s a very rare thing for it to be that easy and I still am kind of amazed by it, because to have a part like that that’s so full: typically you have actresses just beating down the doors vying for it. It’s still amazing to me that I managed to get the part.”