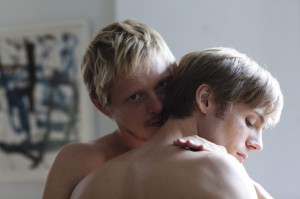 “Keep the Lights On” is a fierce, if understated portrayal of attraction and addiction in the lives of two men, a documentary filmmaker and closeted lawyer across a decade in New York City and how their world moves—and doesn’t move—around them: there’s a marked sense of place and duration in Ira Sachs’ portrait of co-dependency. Sachs’ four features, including “Delta” and “Forty Shades of Blue” feel steeped in private, intimate language, but this story, drawn from a long-term relationship of his own, is the first that has the declarative feel of being unadulterated autobiography, which of course, is shaped and distilled, but not especially filtered through genre or influence, as was his most recent film, “Married Life” (2007).  “Keep the Lights On” has a production website, keepthelightsonfilm.com, that includes an extended production blog, where Sachs writes, “My sister asked me if filming scenes that were reminiscent of very painful times in my past was very difficult, and I have to admit, they aren’t. This movie comes out of some sort of catharsis that happened in the wake of what was the hardest time in my life. I feel on the other side of a lot of what hurt. It starts by not holding on to anything that’s shameful.” There’s a stirring sensation of visiting those secret places we wish we could hide even from ourselves, or as a character comes succinctly to say about the cycle of denial in his relationship, “I’ve been hiding crucial events in my life since I was thirteen.” Sachs has drawn from a fine welter of influences, including French filmmaker Maurice Pialat, whose films are also in their own hard language, and struggle to get close to characters that remain obstinately unknowable. Sachs cites “Goodfellas,” for its New York-ness, immediacy and volatility, and there’s a taste of Olivier Assayas here, too. “Keep the Lights On,” co-written with Mauricio Zacharias, also draws its air of narrative and emotional freedom from limber portrayals of gay relationships like the late Bill Sherwood’s “Parting Glances” (1986) and Lisa Cholodenko’s “The Kids Are All Right” (2010). The texture, however, as shot by Greek cinematographer Thimios Bakatakis (“Dogtooth,” “Attenberg”), is a personal take on the streets of Greenwich Village, on how New York apartments look. (Not only are there scenes shot in Sachs’ own apartment, many of the partygoers in one scene are friends who were at the parties where the original moments passed.) Great production design is a fine art that may be neglected on micro-budgeted projects, but there’s a place for more casual, impressionistic, semi-documentary approaches. There’s a sense, a taste of place as autobiography, as in, “here, I am wresting possession of this corner, of the light at this time of night on this corner.” The film is embedded with art and sounds from its era in Manhattan, working also as a repository of underground gay culture, including a score woven from bits from the diverse catalog of the late Arthur Russell, including plangent, sorrowful cello strains. Talking to Sachs during the Chicago International Film Festival, I asked if this was a good time for American filmmaking, and he said he was “fraught,” despite having just finished a new script with Zacharias, agreeing that we don’t know what’s possible with the economic transformation or the means of production and the faltering of industrial-scale distribution keeping its filmmakers alive. With Thure Lindhardt, Zachary Booth, Paprika Steen, Julianne Nicholson. See Newcityfilm.com for our extended conversation. 102m. (Ray Pride)

“Keep the Lights On” opens Friday at the Music Box.