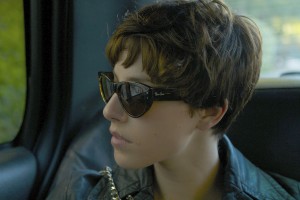 New Yorkers in Los Angeles with Italian filmmaking on the brain: that would be director Ry Russo-Young and her co-writer Lena Dunham, with “Nobody Walks,” a tactile, tensile riff on casual, youthful cunning and craftiness that rubs up gently against both Pasolini and Bertolucci.

Martine (Olivia Thirlby) is a twenty-three-year-old New York photographer with an upcoming one-woman show and she’s come to stay with a Silver Lake family while finishing sound work on a small, experimental film for her exhibit. Julie (Rosemarie DeWitt) is an old friend of Martine’s mother, and Peter (John Krasinski) her husband. Julie is a therapist and mom to a sixteen-year-old daughter from her first marriage and a younger son with Peter; he’s the sound designer who’ll help Martine finish the film. She enters the movie as a passenger, hair pixie-short, looking left and right in close-up, big 1960s-style sunglasses, a movie star in the French film in her Brooklyn mind. Think Jane Birkin: Martine is. But there’s more afoot than admiring a Holga-toting dewy kewpie.

“It’s a small town, at least the parts that we inhabit,” a character says in one of the story’s many seeming and actual seductions, and while the characters are shown at their work, there is an air of L.A. lassitude spun with the centripetal force of the arrival of a stranger. Russo-Young and cinematographer Chris Blauvelt never strike the most apparent of notes—no golden-hour backlit bits of down on exposed skin, say—but most every member of the cast has a moment that involves touch, down to the odd moment when the small son gently touches a patch of Martine’s uncovered hipbone. It’s like a series of ticklish hints of the fevers transmitted through the Eames-like home like a quiet, localized Santa Ana. And the intent way the characters look toward each other! (DeWitt gets a number of sublime reaction shots.)

Russo-Young and Dunham’s script works by suggestion and inference, tipping in the lightest strokes of backstory. There’s little concern about “sympathetic characters” and the like, as a big chunk of the film’s text and action insists, open your ears, open your eyes. Martine’s wardrobe changes from scene to scene, offering in each detail a new clue to her self-image, and there’s telling detail through the exquisitely perfumed fabric, from the sixteen-year-old poetess perched, legs folded on a couch, with a Field Notes steno pad; in a montage demonstrating how sound design is made, a close up of Thirlby’s pooling brown eyes with the slowed sound of Coca-Cola poured into a glass; and Krasinski’s young blond sound assistant whose retro-boat Oldsmobile Starfire bears antique gold-on-black license plates. And, too, his choppy haircut and his sustained double takes: as in several other smaller roles, you can readily draw a strong picture of where he stands in this world.

The title “Nobody Walks” is an ominous variation on the bromide, “Nobody walks in Los Angeles,” along the lines of “no one gets out of here alive!” And the film is fuck-freighted from the top, edgy with currents of want, with apparently straightforward lines like “Are you a free set of hands?” in retrospect, seeming to punch on-the-nose on the nose. (As does the most unlikely character quoting a poet over dinner to the effect that you can understand a poem without knowing what it means.) Of course, these threads of active and possible and prehensile and hoped-for and dangerous and just plain wrong have spun out of control through the agency of Martine’s arrival. While Russo-Young gently dandles the line in a number of instants, there’s no mistaking the angry ghost of Pasolini’s Teorema nodding down at the story. And, too, the film’s physicality honors Bertolucci, whether or not a direct influence.

These characters are exceptionally self-aware and conscious of what’s in the wind, which sets a simmering mood, if not the expected narrative tension. There’s a slower burn: the characters deliberate before turning reckless. A few scenes erupt: an older Italian tutor’s banter with, then anger toward the sixteen-year-old seems like a tacit acknowledgment of the debt to Pasolini, especially in the arguments in Italian, which are also subtitled. A small stretch would suggest that Martine’s 16mm black-and-white film borrows from Buñuel in images of ants criss-crossing the landscape of a young female face as if it were limitless desert. (Russo-Young cites the early photographs of Francesca Woodman as an example of art she showed Thirlby as the kind of subject matter Martine might explore.)

But predecessors and influence aside, moment to moment, smile to smile—there are an uncommon number of gentle smiles, and many of them are Thirlby’s—from emphatic sound design to precise framings, “Nobody Walks” is decidedly a movie about variations (and variables) of feeling and sensation. It leaves a bittersweet bruise.