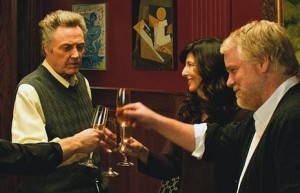 Writer-director Yaron Zilberman presents a twenty-five-year-old string quartet in the throes of interlinked personal and professional crises. The melodrama of “A Late Quartet” is anomalous: the drama is about music. Ludwig van Beethoven’s Opus 131 String Quartet in C-sharp minor is the piece at its center. The musicians belong to The Fugue Quartet, whose dynamics Zilberman says he “modeled” after several true-life examples: the Guarneri String Quartet, the Italian String Quartet and the Emerson String Quartet. He then filmed the Attacca String Quartet for research and recorded the Brentano String Quartet for the soundtrack. After all this preparation, the film opens on a stage with four chairs and four music stands. The first violinist, second violinist, violist and cellist walk on stage, as the names of four top-billed actors appear overhead in credits: Mark Ivanir, Philip Seymour Hoffman, Catherine Keener and Christopher Walken, respectively. The latter three are so well known that the applause acknowledged by their string-quartet characters from the concert audience of extras could be coming from their film audience at the art-house or multiplex. The surprise is seeing them play performers so unlike their past roles. They only look like impostors handling instruments, though. They soon morph into musicians facing challenges to the quartet’s continuity when its elder founder considers stepping down. Traditional melodramatic notes are there: a dire medical diagnosis, a night of infidelity, a lover exiting via a fire escape, a punch thrown, a mother slapping her daughter. Thankfully missing are cliches of the tragic art martyr or imperious miserable immature genius found in other films about artists. Instead there is intertextual stuff like a child on a subway reading aloud Ogden Nash’s poem “Old Men” displayed on a panel, and end credits evoking the layout of the program for a classical music concert. Beyond the acting and the Beethoven, the beauty of “A Late Quartet” is its thoughtful take on the interplay of ego and expression when making music. Zilberman’s understated thesis: a quartet is a microcosm of civilization. With Imogen Poots, Liraz Charhi, Wallace Shawn. 105m. (Bill Stamets)
“A Late Quartet” opens Friday at Landmark Century.
Ray Pride