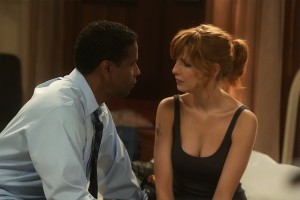 “It’s not like I’ve been doing opera!” Chicago-born filmmaker Robert Zemeckis has been telling interviewers who remark on his absence from live-action filmmaking since “Cast Away” (2000).  Still, the expressive simplicity of the compositions and cutting in films like “Back to the Future” and “Contact” are rich with innate and poignant grace, however some might gauge the populist-slash-subversive narrative strokes of the screenplays of his movies. “Flight” is an adult melodrama about a middle-aged pilot who’s burning both ends of the day, divorced, angry, drug-abusing, boundary-crossing, rule-breaking drunk. Denzel Washington’s Whip Whitaker is one of his great performances, unsentimental and unapologetic about the man’s fiercely held damage. Whip himself is ankle-deep in beer cans and whiskey and vodka and gin bottles, and up to his neck in mumbling self-pity. A man in Whip’s position has a few possible places to go—AA, jail, the grave—but as “Flight” takes off, Whitaker, despite a lack of sleep, a surfeit of sex and being functional while high and drunk, pilots a smaller jet through storms in the skies between Orlando and Atlanta and manages to improvise a crash landing through what seems to be multiple equipment failures. He does his job, and brilliantly, and fucked up. He saves the lives of more than 100 passengers when his aircraft fails and falls from the sky: fucked up. The bland title takes on dimension as the many characters run toward, or away, from darker, deeper things. Taking flight: it takes many life-altering forms. Subplots kick into place, including John Goodman inhabiting the wardrobe and playlist of The Dude as Whip’s friend and equally innovative drug supplier; Don Cheadle as a corporate attorney who knows the wiles of the law like Whip knows the ways of a plane; and English actress Kelly Reilly as Nicole, a thirtysomething Georgia addict who at first seems to have already given up, a breathy, bangs-covering-eyes freckled doe. (She discovers her strength even as Whip falls to weakness.)  There’s a lot of God, too, from the falling plane’s wing clipping the steeple of a Pentecostal church, to the apparition of a cancer patient in search of a smoke in a hospital stairwell, to the entire notion of an “act of God,” in both legal and moral senses. And the plane crash? It’s muscular moviemaking on a taut budget: at an informal gathering before Zemeckis received the “Founders’ Award” at the Chicago International Film Festival, he told me the secret of getting the film done for $30 million, despite extensive locations and special effects, was in working with the best, most professional actors, and cutting the number of shooting days to the bare minimum—”Days cost,” he said—and also himself and Washington foregoing any salary up front. It’s an investment in their talent. Of many small, telling bits in John Gatins’ screenplay (in the works since 1999) is a spare, breathtaking instant in the midst of the nose-down trajectory, in the form of Washington’s matter-of-fact, clipped delivery of the words, “black box,” to indicate to a coworker to say a thing, to leave a certain, particular message: Whip is wholly in control in a breath. It holds the whole film in a professional gesture, from Whip, from Denzel, it’s less than a second, it’s perfect, it’s what American movies do at their best, instant after instant. It’s not opera, is it? 138m. (Ray Pride)