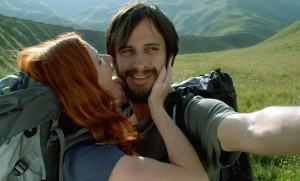 Writer-director-sound designer Julia Loktev follows up her tense, masterful “Day Night Day Night” (2006) with another minimalist gem, a tale of a privileged couple backpacking across the Caucasus Mountains before their impending marriage, until one day… Shooting in an illusorily romantic, picturesque fashion, editing in an unusual, expressive style, Loktev works in quiet strokes (as well as abrupt ones), unlike a movie trailer that would signal “until one day” and then tell all, vanquishing the genuine mystery of a film that deals in present tense, in tension present. Whomever Loktev might see as a predecessor, she hews to action master Walter Hill’s dictum, “No. Fucking. Backstory.” We know very little of Alex (Gael Garcia Bernal) and Nica (Hani Furstenberg), beyond their passion for each other and traveling rough. (The title is a fond riff on the long-creased-and-dog-eared Lonely Planet guidebook series.) They’re accompanied by a tour guide (real-life mountaineer Bidzina Gujabidze) and the contrast between cultures as shown in their actions flowers quietly. But Loktev is as attentive to score as to sound, with much of the emotion and portent carried by the actors’ charisma as well as Richard Skelton’s rich score. Movies are not only text; texture of this quality carries immense weight. Loktev knows images can bear the weight of worlds, not just words. “The Loneliest Planet” is populated with instants of intense beauty. 106m. (Ray Pride)

“The Loneliest Planet” opens Friday at the Music Box.