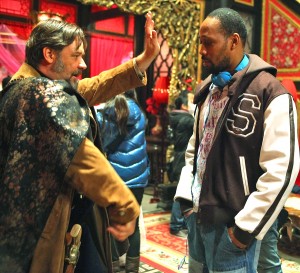 Sometimes you don’t know you’re taking a journey, then there you are in China with an open notebook.

The RZA’s first released feature as a director, “The Man with the Iron Fists,” is set in a mythical feudal China where a blacksmith protects his village from rogues, mountebanks, assassins and gold thieves. The musician-actor’s rounded up a cast that includes Russell Crowe, Lucy Liu and Rick Yune. It’s co-written by Eli Roth, and “presented” by Quentin Tarantino, for whom he’s written scores. So now he’s a director, but he’s obviously always been a talker. It all began with Jim Jarmusch and “Ghost Dog” and a few other boldface filmmakers.

“Jarmusch, man, Jim is my entry into this whole world,” he tells me on a rainy recent afternoon in a dark corner of Double Door before a show. “You know when Jim, Jarmusch, I call him Jim, he’s my buddy, so I can call him that, when he came to me, I didn’t even know what a composer was in the sense of a film composer. I didn’t pay attention to that part of the credits, you know what I mean?” Laughs. “Even if it says, ‘Music by Morricone,’ I may have known that, that Morricone was one of the best, and that he was important to how a film worked, but creatively, when I was making my own music for my hip-hop groups, I started leaving the four bars to eight bars to sixteen bars progressions. Hip-hop started with just one bar. “Wu-Tang was sort of the entry to the two-bar and the four-bar loops. Definitely there wasn’t no sixteen-bar loops in hip-hop. It wouldn’t be hip-hop! Now there are. There’s no boundary. But at that time, there was a boundary and I would be making music, I was studying music theory, my mind is open: ‘Wow, I didn’t know this.’ I didn’t know that I loved the A-minor scale! So when Jim came to me, it was right on time. Right on time. But I didn’t know the tedious process. It’s funny how me and him worked together, because he’d like meet me, he’d say you got any music, I’d say, meet me at the corner of so-and-so, I’d pull up in a van and shit, he’d yell, ‘Hey you got any music?'”

Come to the music, I say. “Yeah! Come to the music. It was funny and shit. I say it’s funny now because now as a composer, you gotta be in the editing room every day. What Quentin made me do on ‘Kill Bill,’ he made me sit in the room about ninety days. His office was right here; my office was right here. Every day I had to come to work. Maybe on Fridays, I could let, yo, y’all, I’m gonna work at home today and shit, smoking early today and I ain’t gettin’ in the car.”

So it’s a nice bonus, learning how editing works over Tarantino’s shoulder as well. “Also it was the first time I started watching dailies, because Quentin was so proud of the film. I was on the set, I don’t know if you know this, I became Quentin’s student on ‘Kill Bill,’ he allowed me… before I was hired as a composer, I was there as a student, watching with a composition notebook, writing notes. For thirty days in China. I left my office, I was doing well, money was no issue, tell a big staff of people, I’ll be gone for a couple of weeks, and I went to China, and I sat there and studied. Anyway, by the time we got back to America, he would bring me in and show me the dailies, so happy, and I’m kinda seeing the experience, but I asked for this. That means I’m watching dailies because he’s watching dailies. The scene is edited this way, and I’m looking at it, and sound effects, we’re into this thing together, you know what I mean? It was a great lesson for me. And ‘Death Proof,’ similar, but not as much time.”

While RZA directed a couple of features that were never released, this particular progression took twelve to thirteen years. More and more layers of filmmaking were revealed. “Right, right, I agree. And as they got more revealed, I think I got more built to understanding the creative process and the creative progression. As a musician, sometimes we get stuck on one instrument, right? There’s a book called ‘How to Write Songs on Keyboards,’ by Rikky Rooksby. He wrote a book on keyboard music for guitarists! Simple enough so a guitarist can understand what he’s doing without even knowing the theories of what a piano means. And because artistic creativity is the same, it’s possible. He has another book that goes to the reverse, ‘How to Write Songs on Guitar,’ for pianists. Actually, his book on how to write songs for the guitar has actually been my greatest guitar book, of helping me with personal guys I play with, like [John] Frusciante and Shavo [Odadjian], but when I go home and I want to get my progressions together, his book helps out a lot. I tell you a story to say that the wavelength is similar. Whether it’s the piano or the horn or the strings or the guitar, even though the scales are different, but the wavelength is the same. That natural progression of art, to me, is the same in film and music. As a musician, music put images in my head, but now film is making music come to my head. As a director, I have the power to control the visual and the audio. I can relinquish that power to whoever I want to, my editor, to my DP, if I have a qualified person, I can relinquish the duties. But that I have the knowledge, I’m able to communicate my vision strongly at this particular level. I mean, I’m no Ridley Scott, I’m not at the level of those guys, I’m starting in the middle. I had time to study with great teachers.”

“The Man with the Iron Fists” opens Friday.