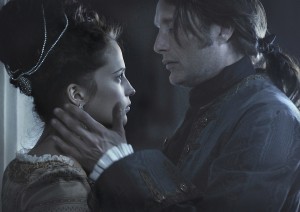 Directed by Nikolaj Arcel. Immediacy of emotion is at the heart of Nicolaj Arcel’s romantic historical drama about Danish court politics and idealism in the 1760s, with a career-making role by Alicia Vikander as Queen Caroline Mathilde, a young woman in a new country. There’s a character to the film, as Arcel says, that “even though the period is obviously there in the set designs, the costumes—it was filmed and edited as we would have filmed and edited a film taking place in modern Copenhagen.” Mads Mikkelsen is stirring as a rebellious doctor called to court to attend to her husband, the daft, increasingly troubled King Christian VII (Mikkel Boe Følsgaard): how much can one behind-the-scenes figure change the world? And how quickly do he and the imported Queen become entangled? Passions play. As well as directing his fourth feature, Arcel is a screenwriter, and wrote Niels Arden Oplev’s Swedish version of adapted “The Girl with the Dragon Tattoo.” There’s a similar headstrong intelligence in both the Queen and Lisbeth Salander, which we talk about, as well as working with Lars von Trier, in a forthcoming interview at Newcityfilm.com. 137m. (Ray Pride)