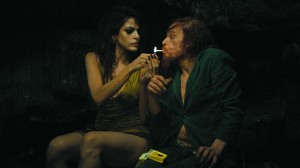 Life, death, impersonation, selfhood, self-image, smoking, cinema, art, more cigarettes, some more death: Léos Carax does nothing if not swing for the chandeliers, and amid the glassy jangle of “Holy Motors,” his fifth feature in a twenty-plus year career, the fifty-one-year-old romantic makes images, curates sound and offers puzzles that took prizes at Cannes and Chicago, among other festivals. Alternately lyrically inspired and cryptic as a stone, it plays out as variations on ideas about performance and responsibility. Still, it’s the kind of go-for-broke folly that ought to emerge as the first film of the millennium after thirteen years of near-silence from the filmmaker of “Boy Meets Girl,” “Mauvais sang” (Bad Blood) and “Lovers on the Bridge.” Carax’s customary alter ego, Denis Lavant, plays “monsieur Oscar,” a man who leaps and gimps and applies extensive makeup to take on a punishing roster of “assignments” in a single day, all of which seem like scenarios for films in themselves. It’s a single jam-packed groundhog day of all groundhog days as Oscar is ferried around Paris in a white stretch limousine, its passenger compartment filled with the stuff of a theater’s backstage, costumes and props and a bulb-ringed makeup mirror straight from “Limelight.” (You can find the character’s name here, too: ” Lé[os Car]ax.”) An alternate title for the movie comes in the end credits, where Lavant is credited as “11 x Denis Lavant.” “I miss the cameras. They used to be bigger than us, now they’re smaller than our heads,” one of the characters notes, suggesting each of the playlets is for an unseen audience, a cinema of surveillance, an audience, perhaps, that is not expected to come. What’s the audience for this jam-packed jamboree? God, it seems. Carax indicated his ambition in an epigraph to the press kit that was distributed upon its Cannes premiere, from Jorge Luis Borges’ story, “Everything and Nothing”: “History adds that before or after dying he found himself in the presence of God and told Him: ‘I who have been so many men in vain want to be one and myself.’ The voice of the Lord answered from a whirlwind: ‘Neither am I anyone; I have dreamt the world as you dreamt your work, my Shakespeare, and among the forms in my dream are you, who like myself are many and no one.'” Yes. Peut-être. Or rather than dream logic, nightmares’ logic. (In the same press kit, Carax invokes Vidor’s “The Crowd,” Hoffmann’s “Tales,” Kafka, Muybridge, Kate Moss, “Beauty and the Beast,” racist immigrants, Lon Chaney, Michel Simon, Peter Lorre, Chaplin and “Modern Times,” Claire Denis and Nick Cave.) So, aside from God? “Holy Motors” will offer the most succor for perceptive and discriminating cinephiles, like poetry for poets and jazz for jazz musicians. Does the film mean less if you don’t know that Oscar’s chauffeur, Édith Scob, was in Georges Franju’s “Eyes Without A Face,” (1959) wearing a plastic mask, or that a brief shot of a bateau-mouche along the Seine parallels a beautiful shot in Bresson’s “Four Nights of A Dreamer”? The compacted range of allusions and implications comprise their own threnody, their own song for the dead. God’s eye as cluttered by the images of a precious past, or a parlous present, with unknowable hours of images uploaded to YouTube per second. The surface sensations offer their own scatty joys, and they could readily be described into the ground. Carax’s films are for kindred obsessives, for filmmakers present and to come, for essayists, who have only just begun to assay. My simplest satisfaction, aside from a bristling, bursting musical number that occurs as an “entr’acte” midway through—came from imposing my own inference onto the title afterward: the “holy motors” are the mechanical complications of a film camera and of a film projector—Carax had to shoot digitally, and the film will be projected digitally in most places—machines made from cogs and gears and springs and Maltese Crosses, anachronisms that whirred and dreamt, splendid contraptions, engines of poetry, not the intangibles of a virtual world. My friend smiled and lit a cigarette. “That’s a start.” With Kylie Minogue, Eva Mendes, Michel Piccoli. 115m. Reviewed in 35mm. (Ray Pride)

“Holy Motors” opens Friday at the Music Box. The U. S. trailer is below. It’s sensational in itself.