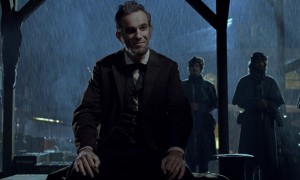 Democracy, circa 1865, is ugly but it ends in glory. Tony Kushner’s literate screenplay works from “Team of Rivals: The Political Genius of Abraham Lincoln,” the 2005 book by Doris Kearns Goodwin. How the sixteenth President got the 13th Amendment through Congress is the guts of this historical procedural that director Steven Spielberg likens to “a political thriller.” The title character is played with meticulous detailing by Daniel Day-Lewis. The star and screenwriter “understood Lincoln on a subatomic level,” lauds the director. The uncynical “Lincoln” is a didactic huzzah for the realpolitik of the Noble Lie. Wrangling votes by almost any means necessary is calculated to end a war and uphold an ideal. The legendary log-splitter from Illinois calibrates a degree of deniability when it comes to the less-than-democratic tactics he subcontracts. One misstep is the comic business and the twangy hi-diddly-dee fiddle music in scenes where his patronage peddlers buttonhole legislators. Composer John Williams sentimentalizes the chiseled-in-granite moments with the Chicago Symphony Orchestra. Fortunately, those lapses into commonplaces are minor. What is so uncommon is the intricacy of Lincoln’s moral turmoil and the dialectics about slavery, property, humanity and national unity. With Sally Field, David Strathairn, Joseph Gordon-Levitt, James Spader, Hal Holbrook, Tommy Lee Jones. 149m. (Bill Stamets)