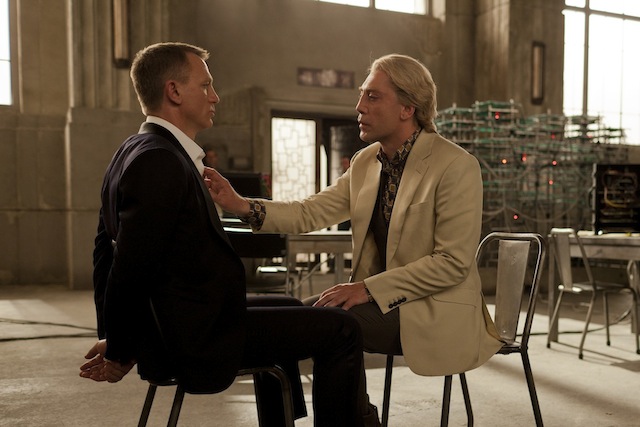 $287 million and counting: a week before opening in the United States and ten days after opening internationally, “Skyfall” is making one pretty Moneypenny. An admirable virtue of Sam Mendes’ film is that the dialogue in the screenplay by Neal Purvis and Robert Wade and John Logan in Bond’s fiftieth year seldom stoops to that kind of second-rate pun-play, with much of the dialogue winky but not weary, self-conscious but not punny: “Only a bold woman wears a backless dress with a Beretta strapped to her thigh”; and later “I like you better without your Beretta”; the in-jokey “Fifty-year-old Macallan, a favorite of yours, I understand” and the literal (but also figurative) “Storm’s coming.” It’s good money for value, as a Brit might say: moody, broody, and expertly made; as much a good movie as a fine Bond movie.

Logan, a playwright by first trade, wrote screenplays for “Gladiator,” “Hugo,” “Rango,” “Sweeney Todd” and “Any Given Sunday,” among others, but he and Mendes take advantage of their shared theatrical background. Extended tête-à-tête mano-a-manos between British actors of several generations—Daniel Craig, Judi Dench, Ralph Fiennes, Naomie Harris, Ben Whishaw, Albert Finney—take advantage of their performance skills. But individual setpieces are weighted with visual elements that draw from a theatrical vocabulary, such as Dench’s besorrowed M overlooking gray London at a picture window slashed with billions of cold tears, match-cut to a wounded Bond cascading over a waterfall like a spent package, as well as a martial arts duel in a disused floor of a Shanghai high-rise lit only by sky-high scrim of neon sculpture.High-art allusions bristle gainfully more of the sort of strokes and coups-de-theatre that would be used to extend the space of the stage, such as the bad guy held in a cage that makes him less Hannibal Lecter and more one of Francis Bacon’s screaming popes. In the National Portrait Gallery, Q (Whishaw) meets Bond in front of J. M. W. Turner’s painting of furious battle at sea, “The Fighting Temeraire,” which prompts a knowing, relevant historical aside, but alongside that is the fantastically simple and haunting 1844 painting “Rain, Steam and Speed.” But a glimpse: the nineteenth century offering a phrase that suits its twentieth-century spy, here, now, in the twenty-first.

While Bond’s passage into middle age is dark, it’s not dour, especially when you consider scenes like a chaste but close passage where he allows fellow agent Eve (Harris) to shave him close with his own straight razor, close, down on her knees: fraught, since the last time Bond sat in such a wicker chair, in “Casino Royale,” his testicles were roundly lashed. The most topical element of the modern-world plotting is the bad guy, Silva, the script modeling Bardem’s louche, white-maned murderer after Wikileaks’ Julian Assange with slanderous glee. Silva’s a Malkovichian Cro-Magnon, a lip-smacking jerk, ripely inhabited. The byplay between the two, exploring what the two may have in common, plays out on one of Hong Kong’s many unlisted islands, a deserted city that’s been shot up and weathered like a Srebrenica-by-the-bay. Taunting Bond as he’s tied to a chair, Silva says, “Your knees must be killing you,” a further iteration of the gesture to just coincidentally both receive royal honors and to perform fellatio.

Fabric is flung and torn, too: Tom Ford’s trim suits are a special effect in themselves, neatly gussying Craig’s blocky form: one coat, especially, a bespoke pea coat, is whimsical, near risible and just right, pluperfect peacockolatry. Roger Deakins shot “Skyfall” with the same digital capture format he used on “In Time,” but he brings the same cool eye for space as in the more formal compositions of the many Coen brothers movies he’s shot, as well as “Jarhead” and “Revolutionary Road” for Mendes. It’s one gorgeous-looking movie. Brand names, a perennial fixture of the series, are prominent yet discreet: Heineken cases in Istanbul’s Grand Bazaar and bottles downed at leisure on a tropical isle; VW Beetles crushed by the half-dozen; the latest Coca-Cola bottles on any given desk; a dram of Courvoisier with the label cheated to camera just so; a glimpse of a fictional news network, “CNN” with a character called “Wolf” and “Blitzer.” A raft of scenes boasts a fuckload of liquor. (All because all the players want a smoke and no one can have one.) When Bond returns from an unscheduled evaporation, bearing shrapnel from depleted uranium shells, as if on the battlefield in Iraq, M snips, “Ran out of drink where you were, did they,” no question mark, thank you.

In an era of remote-controlled, legally dubious drone warfare, what good, the question is repeatedly asked of the women and men of MI6, are assets in the field, feet on the ground, flesh in the flesh? Not so much that it costs money, mind you, but there’s the possibility of revelations, investigations and loss of sustaining prestige. There’s no real critique of power in “Skyfall,” but there is the sleek, pulse-quickening romance of managing self-image, influence and power as days grow dark and fewer. 143m. Widescreen. (Ray Pride)