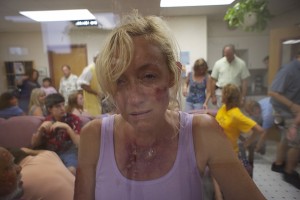 A videocam in a plain room frames a worried young woman from a low angle. Off-camera and online, a man with a calm voice will walk her through a freaked-out account of events of July 4, 2009 that took place in Claridge, Maryland. On a WikiLeaks-style site, we watch her edit of video that wasn’t confiscated by authorities. Three years ago, says Donna Thompson (Kether Donohue), she was an American University communications major working as a TV news intern. Everything is red, white and blue dandy, at least until boils and blisters erupt. The local ER is overrun. Outsized mutant isopods from eons past emerge from toxic Chesapeake Bay, eating the tongues of fish and folks alike. “The Bay” evokes Henrik Ibsen’s “An Enemy of the People,” his 1882 play that was also set in a coastal resort. Chicken farm feces runoff and radioactive waste take the place of nineteenth-century tannery toxins. (Ibsen’s Mayor Stockmann is replaced here by a Mayor Stockman.) As the crisis escalates, the National Guard blocks the bridge out of town and the FBI shuts down websites and cell towers. In “Wag the Dog” (1997) director Barry Levinson showed a Hollywood director staging and shooting a fake incident in Albania for the Department of State. In “The Bay” the Baltimore native and American University dropout brings in first-time screenwriter Michael Wallach, recently employed at the State Department studying electoral chances of Hamas and Fateh candidates for the Palestinian Legislative Council. This superior eco-scare exercise in faux-found video comes from the producers of four “Paranormal Activity”‘s and “Chernobyl Diaries” that use a similar conceit. The press notes list twenty different digital cameras used to realistically simulate all the civilian and surveillance devices recording that apocryphal summer day. Donna adds clips shot by her cameraman that never made air. “Sometimes words have no impact,” she admits. What does have impact is the overwrought horror score by Marcelo Zarvos and the political outrage and panic driving this shock-doc mutant. No one in “The Bay” needs to shriek: “This is just like one of those horror movies!” With Kristen Connolly, Christopher Denham, Nansi Aluka, Stephen Kunken, Frank Deal, Will Rogers. 85m. (Bill Stamets)

“The Bay” opens Friday at the Music Box.