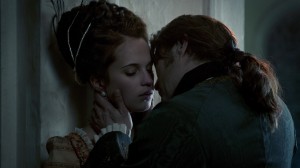 Immediacy of emotion is at the heart of Nikolaj Arcel’s romantic historical drama about Danish court politics and idealism in the 1760s, with a career-making role by Alicia Vikander as Queen Caroline Mathilda, a young woman in a new country. There’s a character to the film, as Arcel says, that “even though the period is obviously there in the set designs, with the costumes it was filmed and edited as we would have filmed and edited a film taking place in modern Copenhagen.” Mads Mikkelsen is stirring as a rebellious doctor called to court to attend to her husband, the daft, increasingly troubled King Christian VII (Mikkel Boe Følsgaard): how much can one behind-the-scenes figure change the world? And how quickly do he and the imported Queen become entangled? Passions play.

“A Royal Affair” feels modern. Despite its period setting, it’s in a school with movies like Olivier Assayas’ “Les destinees” or “Carlos.” Here’s the conflict, but more importantly, here’s the air, the light, the seductive or abrupt way the characters talk to each other, I tell Arcel during his visit to the Chicago International Film Festival. “We had a rule from the very beginning that we didn’t want to make a stuffy kind of historical piece, we really wanted to be as modern as we could be but then again,” he says. “How do you do that, is it even possible if you go back in time like that? One of the things we said, we’re not going to focus on the surroundings, we’re going to focus on the characters as if we were living back then. What if we were actually in the 1760s, we had these characters, how would we film it? As a director, you have a tendency, you want to say, ‘Oh this is the 1760s, we need BIG, we need the castle, all the official happenings,” and we didn’t want to do that. We just wanted to be close to the characters at all times.”

The three main characters are all given a similar clear, pale blue light to isolate them from the rest of the court, of the courtiers in conflict. We’re all ruined for text nowadays, screenplays, arcs, archetypes, we all know what they are. But still, when you’re watching a two-hour, twelve-minute film… “It has to be cohesive.”

In this movie, you quickly know the king has his problems, he’s bipolar before the name. Obviously, there are schemers all around him hoping to reclaim power, especially after the doctor brings new ideas in, but he’s an innocent as much as anything else. “I think he’s the most interesting character, and I think he’s the most tragic character. I mean, you could argue that the love story and the fact that [one character] dies even though he tries to save Denmark and liberate the people, but in terms of human emotions, I think the king, Christian, is more tragic because he’s suddenly alone in the world. He had a chance to have some kind of family, but then he loses that again.”

Arcel co-wrote the adaptation of “The Girl With The Dragon Tattoo,” which features a different headstrong, intelligent woman smashing the conventions of her time. Alicia Vikander’s five levels of reaction when she’s told that her books brought with her from English violate Danish censorship is a Lisbeth Salander moment, calculating how to react, what to withhold, when to withhold.  She’s not doing all so much with her face and body language, but it’s all wonderfully indicated. “Yeah, I do find some similarities,” Arcel says. “She could rebel, but she can’t really, and she has to think everything through. But later in the film, she becomes more true to herself and she actually says what she means. Salander, obviously, she solves conflict with violence and revenge and hatred and of course Caroline is so different from that. I have written maybe ten films, nine of which you have never heard of! I think five or six of them have strong female leads, even the film that I did before this one had a strong female lead, albeit a teenage girl, but still, I think it’s somehow, it’s somehow more interesting to see women fight for power, fight for freedom, than it is seeing men do it on film. That’s why I loved writing Lisbeth, based on Stieg’s books, but I also enjoyed writing Caroline and I do agree that there are some similarities, even though they deal with their problems quite differently!”

You have to be faithful to history, and in the other case, a source novel, so a million faithful readers don’t come after you with torches. But to put a Danish thing to it, those were two kinds of Obstructions, which must have helped you in a way. “I have my co-writer, he’s also here in America with me, and we talk a lot about that. We had the same feeling on these two films. On ‘Dragon Tattoo,’ we had this big fanbase that we had to be very careful about and at the same time we really wanted to change some stuff. You can’t just take a 900-page book and put it up on screen. The same feeling with this one, because the whole Danish people would basically kill us if we lied too much. Or if we omitted one of their favorite parts of the story. So you have to be very careful. But I do think it helps, because always one of the most difficult things, I think, about filmmaking, is the [range of] possibilities. Maybe sometimes there’s too many. And in these cases, these two films, you knew what your limits were and you knew sort of where you could operate, which I guess makes you focus more within those parts.”

“A Royal Affair” is now playing at Landmark Century.