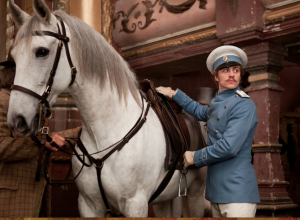 At 7pm on January 4, 1872, as freight train number 7 passed through the Yasenki station on the Moscow-Kursk line, Anna Stepanovna Pirogova “threw herself on the rails under the train, which cut her in two,” reported the Tula Province News. Leo Tolstoy knew her. Two years earlier, his wife recorded in her diary that he told her his idea for a novel about a “high-society” wife “who had gone astray.” A year after Anna’s suicide Tolstoy began writing “Anna Karenina,” which was serialized in the periodical The Russian Messenger before it was published as a book in 1878. Playwright Tom Stoppard (co-writer of “Shakespeare in Love” and “Brazil”) and director Joe Wright (“Hanna,” “Atonement”) opt to “theatricalize,” as they put it, their “Anna Karenina” by literally staging the film in a theater. Prosceniums, battens, catwalks, curtains and rigging frame the film. Horses cross the stage in a horse race scene.  Wright perennial Keira Knightley is Anna, famously played by Greta Garbo in MGM’s 1935 adaptation. The plot tracks Anna’s love affair with a young Count Vronsky (Aaron Taylor-Johnson), a cavalry officer, that dooms her marriage and leaves her with no respectable place in her class. She ends up at a train station with no destination. Stoppard and Wright may not attempt Tolstoy’s spiritual take on love, let alone contemporize Anna’s freedom in her era of emancipated serfs. But their formal gambit is a veritable page-turner. Dispossessed by proper society, Anna is at least free to move from scene to scene with no friction. With Matthew Macfadyen, Domhnall Gleeson, Alicia Vikander, Kelly Macdonald, Ruth Wilson, Olivia Williams, Emily Watson. 130m. (Bill Stamets)