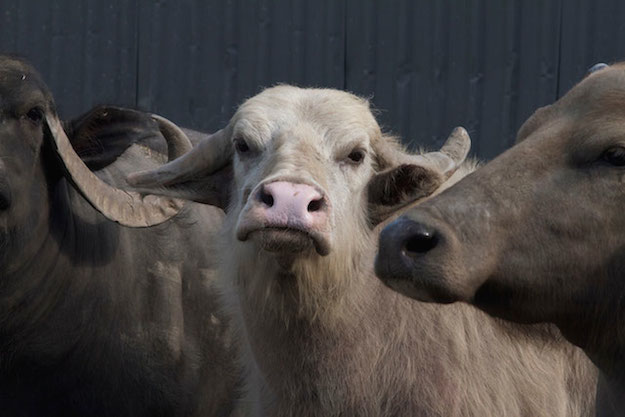 Denis Côté’s meditative “Bestiaire” scrutinizes animals in captivity at Parc Safari in Quebec, his camera gazing as dumbly as a cud-chewer could. Chilly? Cruel? Odd, acute frontal static frames picture the wary, sometimes anxious animals in their pens and cells, and the most disturbing moment is an unbroken take, a frame that includes the lower legs of a zebra kicking, bucking, kicking, bucking, a machine for reflecting hostility. (Côté jokes about near-conversion to “the Church of James Benning.”) An ostrich’s head, held in medium shot for a long time, provides as much anxiety as actorly windmilling like Bradley Cooper’s in “Silver Linings Playbook.” Largely, the collected beasts are objects to look upon, remaining themselves while repositories to fill with our own ambivalence, but resistant to anthropomorphism. The effect is simple, direct, and ultimately, poignant. “Today’s man gorges himself on YouTube,” Côté wrote recently for Cinema Scope magazine. “No need to dwell on the entertaining virtues—often real—of wet kittens in the sink. But can we not lament the harm done by this display of curiosities taken on the fly to the precision of gaze that others so desperately chase? At the other end of the spectrum lies the illustriousness of National Geographic, Animal Planet and other toadying televised inventions… The refusal of an inquiry or the inquiry of refusal, ‘Bestiaire’ is docile like an animal. It waits to be watched, named and placed within the confines where we want to place it.” 74m. (Ray Pride)

“Bestiaire” opens Friday at Facets. A trailer is below.