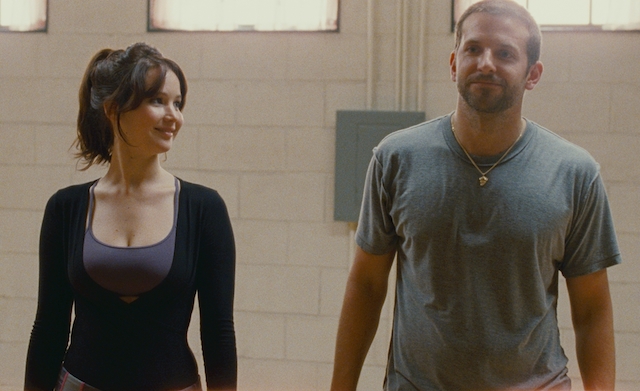 ENTERTAINMENT FOR THE ENTIRE FAMILY IN NUCLEAR MELTDOWN! “Silver Linings Playbook” makes comic hay from bipolar illness, early death, sexual adventurism, self-improvement binges, football fanaticism, degenerate gambling and father-son estrangement, as one would expect from latter-day David O. Russell movies, aka “suffocating shoutfests.” Plus competitive dancing. Plus a lot of running in circles down suburban streets. Bradley Cooper is in your face as a Pat Solitano, a middle-aged man just released from a mental institution to his parents (Robert De Niro, Jacki Weaver from “Animal Kingdom”) in suburban Philadelphia. He’s fixated with getting his wife’s affections back, despite the repercussions of the violent act that got him put away. The tonal shifts from scene to scene match Pat’s own swings in mood. Family connections tangle Pat’s path with the very young widow Tiffany (Jennifer Lawrence), one step advanced from Goth, still the smartest woman on the block no one will take seriously because she’s so compulsive-convulsive since her husband’s abrupt death. (Think sex plus sex then more sex. Plus sex.) The fast-paced, elevated palaver between Cooper and Lawrence keeps the ears open and eyes wide. But the essential squirminess of Russell’s recent films (obviously not including the unfinished, likely-never-to-be-released “Nailed”) is obviated by Lawrence’s intensity, as well as what the New York Times backhandedly complimented in the Sunday Arts & Leisure section as her “sass.” She’s so good up against every member of the cast, even De Niro’s cringing, weepy neurotic, and the byplay between Lawrence and Cooper rehearsing a dance number in Tiffany’s garage-turned-studio is eccentrically-cut delight: warm and weird, it brings the temperature of the rest of the fuck-me?-fuck-you! screwball down to a level known to humans. After Telluride and Toronto debuts, Oscar prognosticators have lathered over the hooks and hokum of “Silver Linings,” but it’s Lawrence who shines here, with a performance much richer than any in Russell’s disagreeable 2010 crowd-pleaser/crowd-slapper “The Fighter.” That, and an absolutely wonderful ending. Seldom-seen Chris Tucker is understated as a fellow patient of Pat’s. 120m. Reviewed in DCP. (Ray Pride)