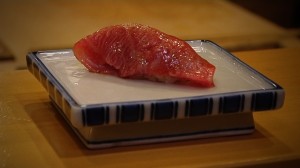 Beauty trails in the nets of the food chain’s imminent displacement and final degradation through planetary appetite. While not of the singular bite of the luscious “Jiro Dreams Of Sushi,” Mark S. Hall’s “Sushi: The Global Catch,” ultimately about the rapid depletion of bluefin tuna in the world’s seas, still finds what is fantastic and toxic in the entire failed enterprise. In any case, mere oblivion nears: what tastes so good kills, too—are supplies of savory sensations like toro, maguro, uni and hamachi sustainable? (Cue comparisons to the deadly “Cove.”) If “The Global Catch” were only one of dozens of descriptive documentaries, it would be soon time to roll credits, reach for or signal for the frozen sake. But Hall also offers prescriptive elements along with demonstrations of craft and trade, making a more hopeful case than the ordinary nonfiction alarum. With Mamoru Sugiyama, Mike Sutton, Alistair Douglas, Casson Trenor. 75m. HDCAM. (Ray Pride)

“Sushi: The Global Catch” plays Friday-Wednesday at Siskel. A trailer is below. Trenor, founder of the first “sustainable” sushi restaurant, will appear Friday.