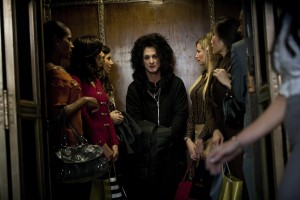 Cheyenne (a pallid Penn with mascara, lipstick and shaggy black Phyllis Diller hair) is a fifty-year-old retired American rock star in Dublin. “Great actors always know much more about the character than the director or the screenwriter,” says writer-director Paolo Sorrentino (“Il Divo”) of his star, Sean Penn. Sorrentino says he modeled this look after singer Robert Smith, at age fifty, from The Cure. Penn’s show-off turn never ceases to surprise. Frail of voice and gait, Cheyenne shops for groceries. He can hardly muster the wherewithal to glare at locals who treat him like a freakish tourist fixture. His wit, and other implements of retaliation, prove to be sharp. Yet he is nowhere near getting out of a sustained funk. He says he once sang “depressed songs for depressed kids.” Two fans killed themselves in 1988. That’s about the last time he spoke to his father, an Auschwitz survivor now on his deathbed in New York City. Fear of flying means Cheyenne crosses the Atlantic on a ship. He gets there too late, almost missing the burial. Unfinished business of his father beckons. As a confused act of filial duty, Cheyenne heads to Bad Axe, Michigan and points west and southwest. During this road trip, he puts himself out and gets into a few families of strangers. “Never having kids has really, really screwed me up,” he shares. When he gets back to Dublin, he will attempt a dramatic act of impersonation to soothe a mother with dementia. Sorrentino and his co-writer Umberto Contarello garnish their homage to American indies with catchy eccentricities. Besides clever framing and decor choices, there are supporting characters, including a pet goose, with irony galore. Inspired casting includes Frances McDormand as Cheyenne’s wife. Her day job: firefighter. David Byrne plays himself and plays a number. His lyric for a 1983 Talking Heads song supplies the film’s title. A first passage of Arvo Pärt  music, so overused in other films, at first sounds like a droll in-joke. “This Must Be the Place” then upends expectations by taking “Spiegel Im Spiegel” seriously later in the film. Sorrentino charms with loopy oscillations between sentiment and sarcasm. With Eve Hewson, Olwen Fouéré, Kerry Condon, Judd Hirsch, Harry Dean Stanton, Joyce Van Patten, Shea Whigham, Liron Levo, Heinz Lieven. 118m. (Bill Stamets)

“This Must Be the Place” opens Friday.