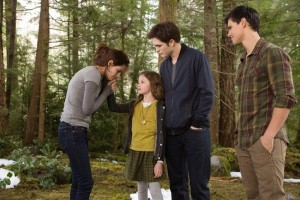 In the fifth and final episode (for now) in the Twilight franchise based on Stephenie Meyer’s juvenile-shelf novels, the married lovers are more compatible than ever. Their body temperatures now match. Neither ever need sleep. So what to do forever, deep in the snowy woods of Washington? Rough non-stop sex, answers “The Twilight Saga: Breaking Dawn—Part 2. When baby Renesmee (Mackenzie Foy and nine other children undergoing CGI “face replacement”) comes into the world, the romance between Bella (Kristen Stewart) and Edward (Robert Pattinson) is far from over. Director Bill Condon and screenwriter Melissa Rosenberg tell a tale of a new blended family (she is a fresh convert to Vampirism; he was born in Chicago in 1901 and converted in 1918). Their hybrid child is in jeopardy from intolerant out-of-town kin. Edward rallies allies from a globally extended family to rebuke the Old World ostracizers, the black-shrouded coven of effete nefarious bloodsuckers from Volterra called the Volturi. Vampires from the Amazon, Egypt, Ireland and Russia all converge to face down the would-be executioners of Renesmee. By the way, she has an unusual power: by placing her hand on your cheek, she can transfer imagery from her mind into yours, like that Bump app for sharing photos from cellphone to cellphone. Her mom can do something much the same. With a wireless caress, she gifts her beloved with a mix tape of past intimacies. It’s really a video album of kissy highlights from the prior “Twilight” films. Another vampire deploys her previz-like gift to show what could transpire in a climactic battle, if a battle should occur at the climax of “The Twilight Saga: Breaking Dawn–Part 2.” That scenario includes the couple’s local allies, Native Americans who morph into massive wolves with an ancient animosity for vampires. Not to worry, there’s a truce for now. Bella once fell in love with one of these biped-quadriped shapeshifters (Taylor Lautner), but human-werewolf unions are as unthinkable as werewolf-vampire unions. Love and venom cannot overcome all prejudices. With Billy Burke, Peter Facinelli, Elizabeth Reaser, Kellan Lutz, Nikki Reed, Jackson Rathbone, Ashley Greene, Michael Sheen, Dakota Fanning. 115m. (Bill Stamets)
Ray Pride