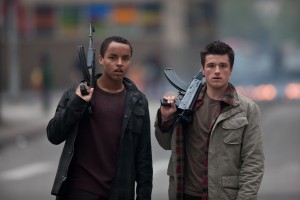 An alarmist montage of actual news clips and made-up headlines opens “Red Dawn,” the long-on-the-shelf remake of John Milius’ 1984 original. His opened with “Soviet Union Suffers Worst Wheat Harvest in 55 Years” and “NATO Dissolves. United States Stands Alone.” Director Dan Bradley and writers Carl Ellsworth and Jeremy Passmore update the bad news with Obama warning of “cyber-threats” and fiscal crises in Greece, Italy, Portugal and Spain. The juvenile action film relocates from Colorado to Washington State, and North Koreans replace the Cubans and Nicaraguans who parachute into Spokane and take over. Again, high school kids pile into a pick-up truck and race to the hills. Insurgency ensues. (See what C4 on a skateboard can do).

“Alexander Nevsky” played at the local cinema in 1984; in the 2012 “re-boot,” an expression deployed a dozen times in the press kit, one kid reality-checks a comrade with: “Dude, we’re living ‘Call of Duty.’” Back when the USSR was the invader, Milius rebuked his critics with: “a story exactly like this is taking place in Afghanistan every day.” This “Red Dawn” could have done so much more than give us a U.S. Marine on leave from Iraq reflecting that he went from a “good guy” trying to create “order” over there, to a “bad guy” now creating “disorder” in his hometown under occupation. For less than a half minute does this film think beyond the territorial patriotism of the Wolverines, the weasel-family totem of the local high school football team repurposed, or “re-booted,’’ by teen freedom-fighters. With Chris Hemsworth, Josh Peck, Josh Hutcherson, Adrianne Palicki, Isabel Lucas, Connor Cruise, Jeffrey Dean Morgan. 93m. (Bill Stamets)