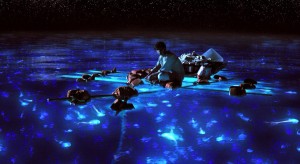 The great nineteenth-century Romantic painter of sky, water and tempest J. M. W. Turner wanted to lash himself to a mast  to get a full faceful of sea. There’s some of that giddy danger in the splendid surfaces and 3D depths of Ang Lee’s “Life Of Pi.”

The ferocious swells and intent visual beauty Lee has brought to Yann Martel’s best-selling seeking-of-the-spiritual yarn quickly evokes a second thought: “Kitty, kitty, kitty, nice kitty, here kitty, kitty, kitty, kitty,” in response to a gorgeously rendered digital Bengal tiger named “Richard Parker.” From a shipwreck-and-survival story with lots of God bits studded within—the ship that sinks, Tsimtsum is named for a Kabbalistic concept that God must withdraw from a world he creates—Lee conjures something richer than Martel’s magical somnambulism. And David Magee’s script adaptation mocks overreach. A novelist who met his uncle back in India visits an older Pi: “He said you had a story that will make you believe in God.” And Pi says, smiling, “He would say that about a good meal.”

In the face of a zooful of animals crossing the waters on a freighter—”It moved with the slow confident mass of a continent”—and then tempest-tossed into the sea, gnomic lines like “The animal’s not your friend. When you look in an animal’s eyes, you see yourself reflected back in your eyes” hold basic satisfaction. Even when stalled under bleaching sun on flat ocean, in relentless deep focus, a reflection like “We were both raised in a zoo by the same master” sings simply.

The film’s delirious, deliquescent prettiness is akin to the color-mad fantastication of “The Conformist,” by Bernardo Bertolucci, Vittorio Storaro and Ferdinando Scarfiotti, or Tarsem’s “The Fall.” “Why would a lotus flower hide in the forest?” a character justly asks, a touch of likely unintentional self-reference. There’s ceaseless play of imagery: Days of sun and Pi’s face becomes a splay of freckles, creating a mask like Richard Parker’s native markings or the stars above. Luminous jellyfish float cool blue beneath the water, while a star field is cold yet calming behind his head. And weather is never small: on the horizon, a further threat comes in the form of a white thunderhead the scale of a fine glacier.

“How dare you!” I joke after a brief introduction to Lee. You’re not supposed to make a film that’s beautiful in every frame. Your eyes need some rest. Smiling, ready to laugh, Lee says, “Thank you. It’s very challenging. ”

There are so many varieties of physical beauty in the film. Nothing looks ordinary; the plainest settings still gleam. Each setting, from a childhood in Pondicherry, India, to the days on the water, even the grown-up Pi’s apartment in Montréal, have only as many specifics as a storybook. “I’m glad you say that!” he says, laughing. 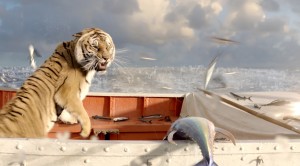 “That wasn’t my goal actually; I can’t make a visual film. It never occurred to me. People say about the visual thing…” He pauses. “I think: it has to be a movie about ocean, about India, so just naturally…” A smaller laugh. “I’m not even a visually trained person, I’m dramatically trained. Visually, I rehearsed the scene before I decide how to shoot it.”

Not storyboards, but a pre-visualization, images in motion? “Yes. Maybe because I visualized it—because I had to—because it’s so expensive. I animated the whole ocean part before making the movie, to raise the money. It’s totally different from every other movie [I’ve made], maybe that ‘s why. But people are saying to me that it’s beautiful, it never occurred to me. I was just making it!”

There’s a single sequence shot in India, we see one candle. It moves out onto the water. The camera tilts up, across the water, there are hundreds of candles afloat, there are thousands of people on the horizon, and then there are stars, so many stars. Whatever part is digital and whatever part is real, it just feels like… you’re there.  Lee chuckles. “When I saw those candles, it was… ‘it’s gotta be stars’ reflections. Because I had already pre-visualized the ocean part, the night when he has a perfect mirror ocean, it looks like they’re floating in space? I was thinking about that, ‘Oh that goes here, too.'”

There are rhymes of that throughout. Very early on, when his uncle is teaching him about swimming, seen from beneath, he seems to swim across the sky itself, plus it’s in the style of a French travel poster of the mid-century. Those colors! And later, after the shipwreck, Pi is beneath the water, he’s stopped sinking, his arms are outstretched, he’s transfigured against the ship going to the bottom of the ocean. At that moment, it could be read as transfiguration, Christ-like but water and sky are unified all the way through. “I did make one point to my crew,”Lee says. “I want to treat water like emotions. And sky is like life and death. What is going on on the water is death, but it’s liquid underneath, it carries lots of life, it’s where life begins. Sky is kind of death—heaven—so I wanted to echo anything to do with water, clouds, even mist, that shows life, therefore emotion. Whereas clear sky is spirit. Death.” Lee gestures with his hands. “Life… and death. So I did make that one point to my crew, but nothing beyond that. It’s just visual inspiration. You have no dialogue, you have to do something!”