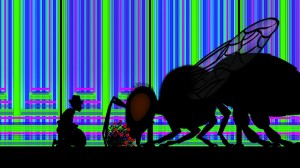 (Les contes de la nuit, 2011) Six folk tales from around the world comprise the new caravan of silhouette animation from the animator of “Kirikou and the Sorceress” and “Azur & Asmar.” The genteel “Tales of the Night”‘s most striking passages evoke an endearingly imperfect variation on Indonesian shadow puppetry, but the boldly, incautiously colored animation has a flat sameness over the duration of adventures, which may not have been the case in its original 3D production format. Students of Lotte Reiniger’s painstaking films like “The Adventures Of Prince Achmed” will also find things to admire. The “Arabian Nights”-styled stories run a gamut from France to Africa to Tibet to the Caribbean to Aztec times. All have their moments, from the droll to the dour. Coincidentally, the framing device of an empty cinema where new stories unfold each night is paralleled by the structure of Leos Carax’s “Holy Motors,” to lesser effect. 84m. 35mm in French-subtitled screenings; HDCAM video in English dubbed screenings. Schedule at siskelfilmcenter.org/talesofthenight (Ray Pride)

“Tales of the Night” opens Friday at Siskel. A trailer is below.