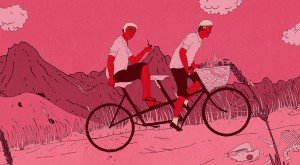 Often referred to as “the dead Python,” Graham Chapman, who died in 1989, led a vivid, harrumphing life off-screen as well as on in his performances as part of Monty Python, and “A Liar’s Autobiography–The Untrue Story of Monty Python’s Graham Chapman,”  is an animated adaptation—in seventeen disparate styles!—of his scurrilous memoir of the same name. Voices of all the Python conspirators, save Eric Idle, are heard, and Chapman manages to narrate from beyond the grave, courtesy of an audiobook version of his work. How to classify the non-Python, non-comedic, largely tiresome material at hand? I had a very nice sandwich while watching it, but the mustard may have been a little too spicy for the sweet, gentle ham. 82m. (Ray Pride)

“Liar’s Autobiography” opens Friday at the Music Box. A trailer is below.